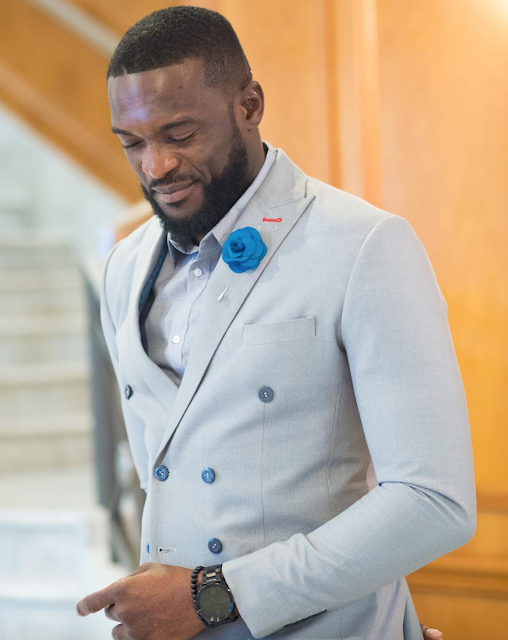 When model turned actor, Kenneth Okolie, released some of his wedding pictures online, from the comment sections of some blogs, it was evident that he had unintentionally broken some hearts.

Some ladies who drooled over his body aired their minds. Some went as far as pleading with the former second runner-up of Mr. World 2010 not to lose his ‘lovely physique’.

During a chat with Saturday Beats, the actor reassured his fans that marriage would not change his physique as he was a fitness enthusiast.

He said, “Marriage is amazing and wonderful. My diet has not changed even as a married man and I have always been a fitness enthusiast, it is part of my lifestyle. A week cannot pass by without me visiting the gym to do at least a number of push-ups.

“My wife knows this about me already; I also try to encourage her to be a fitness enthusiast. I eat regularly but I cannot get fat, the worst that can happen is that my belly would get big. I won’t get fat, it is in my gene. When my belly seems big, I just head to the gym, so marriage cannot change my hot body.”

The actor told Saturday Beats that he never dreamt of becoming an actor but had to venture into the world of make-believe because models were not treated with respect in Nigeria.

Okolie said, “I have always had a passion for acting. Even though I never dreamt of becoming an actor; somehow, I found myself here. I just gave acting a shot and after I tried it, I never looked back. I started as a model while I was in school in Ghana. The only stint I had with acting was in secondary school, when we had a stage play

“Even though people liked it, I never saw it as a big deal until I came back to Nigeria for the Mr. Nigeria contest. During the competition, I did a monologue and got a standing ovation for it. Since my flair for entertainment was still burning bright, I gave acting a shot.

“I dumped modelling for acting because people do not value models in Nigeria. Models are not regarded in Nigeria; they just use us as hangers. They don’t respect us but internationally, models are a big deal because without the models, you cannot sell your product. That is how they make the fame and money.

“In Nigeria, a designer can pay you about N10,000 to wear their product and that is it. There is no respect. Even when I won Mr. Nigeria, there were some agencies and designers that made comments like, ‘You are Mr. Nigeria, so what? Go and sit down.’

“When I saw that, I crossed over to acting and became popular. Now, those same guys are asking me to wear their clothes and that they would pay a lot of money. They are now the ones begging me to endorse their product. The truth is that I did not model for a long while in Nigeria because of all this nonsense. The disrespect really angered me, so I faced acting. I was only fulfilled as a model when I did it outside Nigeria because the respect was there.”

Posted by Unknown at 11:00 am
Email ThisBlogThis!Share to TwitterShare to FacebookShare to Pinterest
Labels: Gists