Mbaka To Buhari: Change Or Nigerians Will Change You In 2019 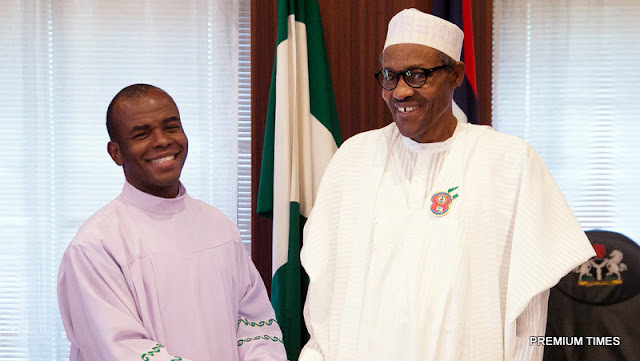 Catholic priest and Spiritual Director of the Adoration Ministries, Enugu, Rev. Fr. Ejike Mbaka, has warned President Muhammadu Buhari that Nigerians will ‘change’ him in 2019 if he does not change his style of leadership.

The priest advised Buhari against seeking a second term, and warned that the President risks being ‘blown away shamefully’ by the wind of change which he set off when he defeated former President Goodluck Jonathan in 2015.

Mbaka, who was hitherto one of Buhari’s most vocal supporters, spoke during a special New Year Eve service at the Adoration Ground, in Emene, Enugu.

The fiery priest’s ‘romance’ with Buhari started at a similar event, on the eve of January 1, 2015, when he condemned the incumbent President Jonathan, in a message entitled, ‘From good luck to bad luck.’

Mbaka had, in the sermon, asked Nigerians to reject Jonathan of the Peoples Democratic Party during the 2015 presidential poll and predicted Buhari’s victory.

Buhari eventually won the election and, months after his inauguration, received Mbaka in the presidential villa.

However, subsequent statements attributed to Mbaka suggests that his support for Buhari was waning, and in 2016, he warned the President that Nigerians would not vote for him in 2019 if he did not address the high level of hunger and suffering in the country.

Mbaka not only restated the warning but went further to declare that Buhari was ‘toying’ with the victory he won in 2015, in a fiery sermon on Sunday night.

He declared that if Buhari did not ‘sit up,’another person would take his office.

Expressing dissatisfaction with Buhari’s leadership, the priest noted that 2017 was one of the most horrible years in Nigeria’s history, and demanded that the President change his ‘change agenda’, which he described as questionable.

Mbaka, who had in the past faulted the President for not appointing the right people and listening to the wrong advice, said the hardship in the country was foisted on Nigerians by a cabal that had ‘kidnapped’ the President.

The cleric, who declared that Nigerians would soon be rescued from ‘captivity,’ urged Buhari, who, according to him, “is in trouble, to immediately do away with the wrong people” he surrounded himself with.

“Listen to me – 2017 became one of the most horrible years in this country.

“The Lord says captive Nigerians, you will be speedily rescued. Things are very very difficult, hard and tough nowadays. The hardship is not from God, they are man-made.

“President Buhari must wake up and sit up immediately. Heaven demands Buhari, our President, to change all those who are holding and caging him in captivity. If he will not change them, he will be changed.

“Mr. President, wake up, sit up. God said you are toying with the privilege given to you. There is no time. Nigerians are dying in your hands. People are not happy with your system.

“Change or you will be changed – God said that Buhari is in trouble. Buhari is hypnotised. Buhari is in a horrible bondage. Buhari’s mantra has been cannibalised.

“Unless President Buhari quickly and strategically positions the right people and changes the former ones inaugurated by him, the wind of change, that he himself inaugurated, will blow him away shamefully.

“The wind will be too strong that Mr. President and the cabal will be blown out of office shamefully.

“The wind will be irresistible for it will come like a hurricane. Buhari can handle this problem but his office, if he is not careful, another will take.

“Change or you will be changed; after all, you are the one who introduced change as your mantra.”

The priest insisted that rather than the said cabal, Buhari should be blamed for the problems in the country.

“Mr. President, you are to be blamed, not your cabal. You have your brooms, but the cabals have their bags; either you sweep them away or they throw you into the bag.

“Heaven cried that your methodology is not just archaic but too sluggish, very slow.

“The situation in Nigeria needs speed but you are too dull,” he said.

He said, “His (Buhari’s) pattern of battling corruption is not just archaic and barbaric; it is a witch-hunt, terribly selective.

“Mr. Buhari, as the President, why should you be picking and choosing those that you and your so-called EFCC man would want to arrest, so that your party becomes a hideout for criminals, so that any person who does not want to be arrested will become an APC person? Is that not corruption in itself?

“It is the same people that go to the APC, they drop their umbrella and pick the broom, but instead of using the broom to sweep away corruption, they are using it to sweep money into their pockets.

“Your change mantra is questionable. You are to change your change or you will be disgraced out of office.”

Mbaka noted that Buhari’s failure to check the excesses of the Fulani herdsmen had cast doubts over his agricultural development plan.

He said, “Why should you be talking about agriculture and you leave the Fulani herdsmen? Farmers don’t have hope; don’t you hear what is happening in the country? Can’t you use your presidential mandate and help the less privileged?”

The priest declared that Buhari was not a President in the real sense of the word.

“The spirit of God says that Mr. President is just President in the mouth – he is not the real President per say. He is a pseudo-President, people are running the government the way they like and giving him articles to sign.

“Mr. President doesn’t know what is happening in his government, what a pity,” Mbaka said.

The priest urged Buhari to jettison plans for a second term in office.

Mbaka said Buhari had himself to blame for his problems, especially after failing to heed the advice of his wife, Aisha.

He said, “Mr. President, as I was waiting on the Lord, I am asked to advise you, don’t come out for second tenure, after this, retire peacefully.

“Mr. President, you are the cause of your own problem. God gave you an adviser, a wonderful mentor, a visionist, a matriarch, in the person of your wife, Aisha, but you don’t want to listen to her; that woman is heartbroken, because she understood that you are not yourself.

“Come back to yourself or you will cry by the time you will be sent out of office. Those who are encouraging you to come out and run again, they want to disgrace you shamefully and publicly.”

Mbaka also noted that age was not on Buhari’s side.

Noting that the North ought to complete its tenure even without Buhari, Mbaka suggested Gombe State Governor, Ibrahim Dankwanbo, as an alternative.

According to him, although he does not know whether Dankwanbo was in the All Progressives Congress or the PDP, he knows that the man has what it takes to lead Nigeria.

“I am not campaigning for him (Dankwanbo) but I am talking about somebody who can lead us forward; somebody with vision; to change Nigeria is not difficult.

“Wherever such a person is, let his party make him available for Nigerians to see it,” Mbaka said.

The priest added that it was not yet the turn of the Igbo to produce the President.

Posted by Unknown at 1:03 pm
Email ThisBlogThis!Share to TwitterShare to FacebookShare to Pinterest
Labels: NationalNews