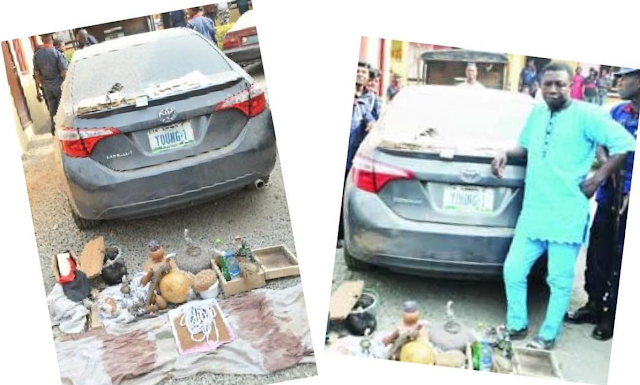 Parading the suspect on Thursday, the state Commandant of the NSCDC, Mr. Pedro Ideba, said Ayuba was involved in advanced fee fraud.

He said, “He (Ayuba) has defrauded many of the people who approached him for prayers of various amounts ranging from N300,000 to N36m. But he was arrested following a complaint by one of his victims, Tajudeen Ekundayo, whom he allegedly duped of N4.3m.

“Immediately the complaint was lodged at the command, my men swung into action and arrested the man, who is the kingpin of a syndicate in Arigidi Akoko, while other members of the syndicate are still at large.”

The commandant added that criminal activities ranging from kidnapping, ritual killings and fraud had been traced to Ayuba, adding that the traditional ruler of Arigidi Akoko, Oba Yisa Olanipekun, had written a letter to the state command on the alleged criminal activities of the suspect.

Also paraded by the corps were one Jaiyeola Tosin and Abiodun Oluwaseun, who were allegedly involved in vandalism and fake currency business, respectively.

The commandant said Tosin was arrested in Ikare Akoko, in the North-East Local Government Area of the state, for vandalizing transformer cables.

He said the suspect was arrested by men of the Nigerian Army and handed over to the corps for further investigation and prosecution.

Oluwaseun, according to the NSCDC boss, specialized in printing and spending counterfeit naira.

Ideba said the suspect was arrested after using fake N1,000 notes to buy N24,000 worth of goods from a provision store.

The commandant said all the suspects would soon be charged to court.

Posted by Lawrencia at 8:51 am
Email ThisBlogThis!Share to TwitterShare to FacebookShare to Pinterest
Labels: Crime