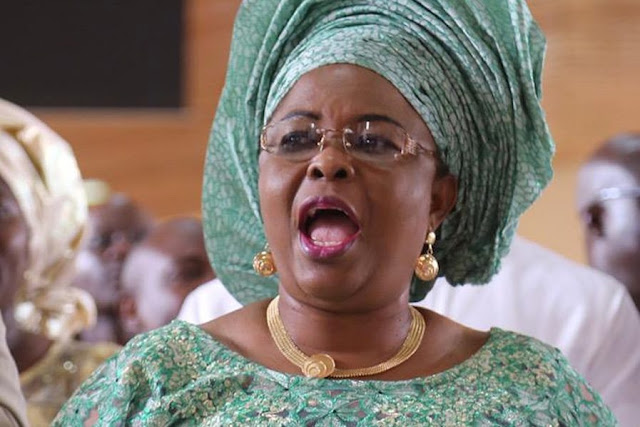 Many months after being watch-listed, Esther Oba, ex-First Lady Patience Jonathan’s sister has been arrested by the Nigerian Immigration Service (NIS) and handed over to the Economic and Financial Crimes Commission (EFCC).

EFCC investigators are to interrogate her in connection with the alleged laundering of over N359, 397,458.26 through two firms linked with the former First Lady.

Esther Oba was arrested at the Nnamdi Azikiwe International Airport at about noon on Monday, shortly after arriving from Dubai in company of her husband, three children, and a house help.

Upon ascertaining that she was the person watch-listed, the Nigerian Immigration Service alerted the EFCC whose operatives immediately took custody of her.

Clad in a flowery green Ankara with a touch of yellow, the woman was seen yesterday being relocated to a female cell at the EFCC headquarters.

EFCC sources said the suspect is central to the ongoing probe of the former First Lady.

One of the sources said: “We have been looking for her but she has been faceless. We watch-listed her for arrest by any security agency.

“Fortunately at about noon on Monday, the Nigerian Immigration Service(NIS) contacted us that she was arrested while returning from Dubai with her husband and three children. She was arrested at Nnamdi Azikwe International Airport.

“Her name featured in the operation of one of the accounts of ex-First Lady Patience Jonathan. The account is in the name of AM-PM Global Networks Limited which is domiciled in Stanbic IBTC. It is one of the accounts we have frozen. She is the sole signatory to the account of this firm suspected to have been used for money laundering.”

The source added: “From our findings, the closing balance in the account was N317,397,458.26 as at August 10, 2017. The inflows came without a clear narration as to the source. However, investigation is being intensified in that direction. Her claim is that the company was owned by their mother who is deceased. However, major inflows into the account occurred after the demise of their mother, Mrs. Esther Fynface Charity Oba.

She claimed that transactions were continued by her late brother, Mr. Tamuno Mohammed Tonye(who was buried in December 2017), but in an attempt to regularise the account at the advent of the of BVN, a board resolution was submitted to Stanbic IBTC requesting that Esther Oba should be the signatory to the account.

“She took charge of this account on 3rd February 2016 and between March and May 2016, the account had an inflow of N350m but she said she does not know the source. She is attributing the source to her brother.”

The source quoted Mrs Oba as saying: “It is only my brother that can explain the source of the cash and he is dead.”

Another source said: “We are suspecting that she and others became involved in money laundering in their quest to mop up money after they left office.

“For instance, on the same day February 3, 2016, another board resolution was submitted to Stanbic IBTC by Finchley Top Homes Ltd authorising the same Esther Oba to be the sole signatory to the company’s account which had about N42million.

When we showed her the international passport of Ama Emilia, she said she cannot remember the face.”
from the nationonline.

Posted by Unknown at 12:36 pm
Email ThisBlogThis!Share to TwitterShare to FacebookShare to Pinterest
Labels: Crime