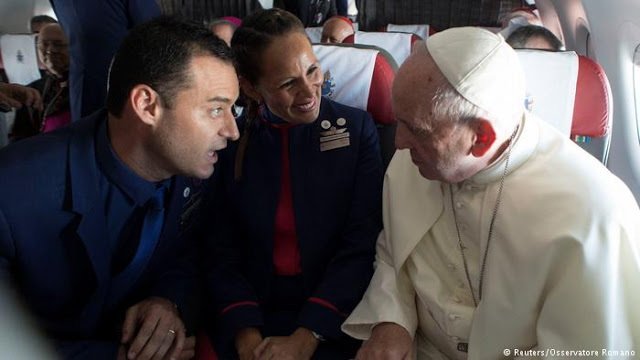 Pope Francis married a couple of flight attendants on the papal plane as he flew over Chile. The couple had been wed in a civil ceremony but couldn't marry in their parish church because of the country's 2010 earthquake.

During the third day of his trip to South America, Pope Francis married a couple of airline employees aboard the papal plane as it flew over Chile.

LATAM airline flight attendants Paula Podest Ruiz, 39, and Carlos Ciuffardi Elorriga, 41, told the pope they had been married in a civil service but the religious ceremony they had planned in their parish church in Santiago could not take place because it was heavily damaged in the country's 2010 earthquake. 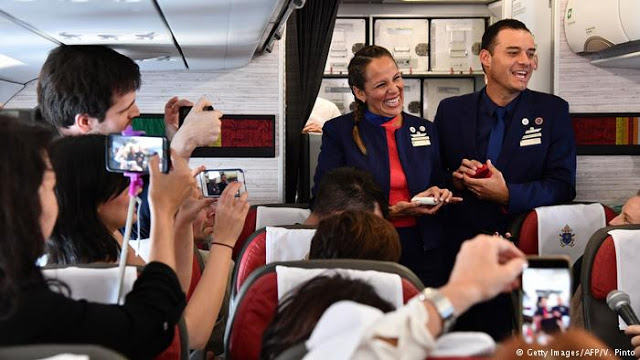 So, they asked him to bless their marriage. But he had something else in mind.

"Do you want me to marry you?" he asked them.

The pope said yes. He performed a brief ceremony in the front of the plane with an airline executive as the official witness. The document was signed by a Chilean bishop on board.

The brief ceremony took place in the front of the plane on a two-hour flight taking the pope from the capital Santiago to the northern city of Iquique.

"Everything is valid. Everything is official," said Greg Burke, a Vatican spokesman. "We will show you a picture of the document later."

At the end of the ceremony, which took place at an altitude of 36,000 feet (11,000 meters) and out of view of journalists traveling with the pope, the two co-signed a handwritten marriage certificate which bore the pope's simple new signature "Francis."

Posted by Unknown at 11:05 am
Email ThisBlogThis!Share to TwitterShare to FacebookShare to Pinterest
Labels: InternationalNews