I Rob Because Many People In Government Steal — Suspect 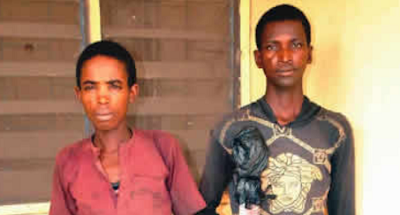 The Niger State Police Command has arrested two suspected armed robbers, Shehu Bida and Bello Mallam, who claimed that they went into robbery because there was recession in the country and the “government did not provide any job for people.”

The two suspects were arrested in Talba Estate, Bida town in the Bida Local Government Area of the state.

Punch learned that Buda, 20, and Mallam, 18, were trailed and apprehended by the police after robbing one Mohammed Mohammed of the sum of N7,400 and two handsets valued at N9,000.

The suspects confessed that they inflicted injuries on Mohammed before dispossessing him of his N7,400 and the two mobile phones.

Northern City News gathered that the hoodlums used a machete and planks to injure Mohammed on the head, for preventing them from raping his daughter.

Buda told our correspondent that he committed the crime due to the economic recession in the country.

“Many people are stealing in the country, including top government officials. People are dying of hunger and there is no job. What else do you expect me to do other than stealing?

“If am discharged by the police, I will still go back to rob people. The country is in a bad situation,” the suspect said unrepentantly.

The Police Public Relations Officer, Muhammad Abubakar, told Northern City News on Tuesday, that the operatives recovered from the suspects the machete.

The police said the suspects would be charged to court at the end of investigation.

Posted by Unknown at 10:21 am
Email ThisBlogThis!Share to TwitterShare to FacebookShare to Pinterest
Labels: Crime