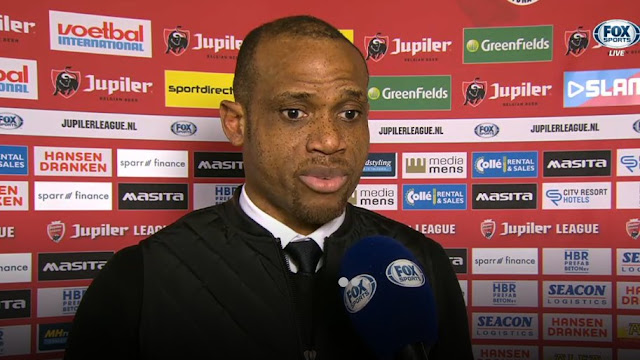 The club statement said: "Several attempts by the club to encourage a change in the coach's behaviour have unfortunately not worked, resulting in an unworkable situation.

The board of Fortuna Sittard emphasizes that the decision to sack Sunday Oliseh is not motivated by the current sporting performance.

The coach's unacceptable actions have made cooperation between many people within the organization impossible - from players to employees. Fortuna Sittard regrets the decision, but states that the club interest goes above all else."

It will be recalled that the man-management skills of Oliseh was in question during his time with the Nigeria’s Super Eagles.

His entrant into the national team saw the sudden retirement of the duo of Emmanuel Emenike and Vincent Enyeama who both faulted his style.

However, Sunday Oliseh took to Twitter to Former Super Eagles Coach, Sunday Oliseh, has given a reason his abrupt suspension as Coach of Dutch club, Fortuna Sittard, on Wednesday. She wrote:

"I confirm: Due to my refusal to participate in Illegal activities at Fortuna sittard & violate the Law,i have been Suspended from my duties as Coach by the Foreign Owners of Fortuna.Unfortunate for the lovely fans, my players & our hard fought phenomenal positioning for Promotion."

Posted by Lawrencia at 11:57 am
Email ThisBlogThis!Share to TwitterShare to FacebookShare to Pinterest
Labels: Gists