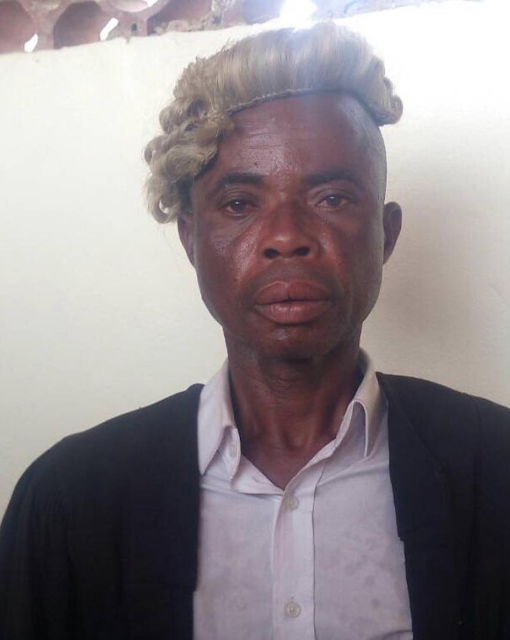 Fifteen years after allegedly acting as counsel, the law has caught up with a fake lawyer, Chris Elisha, at the Ojo Magistrate’s Court, Lagos State.

The police at the Ojo division arrested the 49-year-old on Tuesday following a suspicion raised by a lawyer, Nnamdi Nwafor.

PUNCH Metro learnt that Elisha had appeared in the court that day for a suspect arraigned by the police.

It was gathered that he wanted to quote a section of the constitution in an attempt to apply for his client’s bail when he went off at a tangent.

His action was said to have aroused the suspicion of Nwafor, who was also present at the proceeding.

Our correspondent learnt that after the court sitting, Nwafor challenged the suspect and accused him of being a fake lawyer.

In the ensuing argument, court officials, lawyers and policemen attached to the court were attracted to the scene and Elisha was taken to the police station for interrogation.

He reportedly owned up to the police that he had studied at a Ukrainian university, but had yet to be called to the bar.

A police source told PUNCH Metro that the suspect led operatives to his residence on Alhaji Ahmed Close, Ojo, where some legal paraphernalia, including wigs, gown and documents, were recovered.

The Lagos State Police Public Relations Officer, Chike Oti, on Wednesday said Elisha could not present any certificate to show that he studied Law.

He said, “Chris Elisha has been practising as a lawyer for the past 15 years without being spotted. However, nemesis caught up with him on February 6, 2018, at the Ojo Magistrate’s Court where he appeared on behalf of an accused but found it difficult to move a motion for the variation of the bail condition of his client.

“His predicament did not go unnoticed by one Nnamdi Nwafor who challenged his qualification. The hot argument between both men attracted the attention of other lawyers and the court duty policemen.

“The officers took the suspect to the nearby Ojo Police Station where he confessed that he was a mere charge and bail lawyer, who had been practising for the past 15 years. He claimed that he was more into corporate law practice and does little of litigation. He stated further that he read law at Eastern Ukrainian University, in the former Soviet Union, but had no certificate to show for it.”

Oti, a Superintendent of Police, said the suspect, a native of Avodim Ubakala, in the Umuahia South Local Government Area of Abia State, had been transferred to the X-Squad section of the state police command in Ikeja and would be charged to court at the conclusion of investigation.

“The Commissioner of Police, Edgal Imohimi, has warned that policemen are in every nook and cranny of the state and have been mandated to apprehend anybody perpetrating illegality, no matter how highly placed they are.

“He further admonished professional bodies to double check their members in order to fish out the quacks in their midst,” he added.

Meanwhile, the command says eight members of robbery gangs, who allegedly disguised as commercial vehicle operators across the state, have been apprehended.

Imohimi said the suspects were tracked down by decoy operatives, adding that they would be charged to court after investigations.

“These bandits usually pose as genuine commercial vehicle operators in order to hoodwink and rob unsuspecting members of the public. They sometimes take advantage of gridlock to attack their victims,” he said.

Posted by Lawrencia at 9:35 am
Email ThisBlogThis!Share to TwitterShare to FacebookShare to Pinterest
Labels: Crime