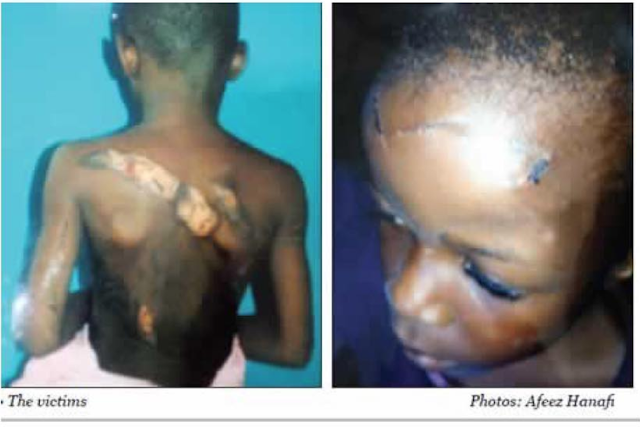 A 10-year-old girl, Vera, and her younger sister, Favour, five, are grappling with injuries inflicted on them by their stepmother.

The woman, Chidima Nnachi, reportedly beat up Vera, rubbed pepper on her eyes and burned her back with a hot knife.

She also reportedly injured Favour on the forehead and inserted pepper in her eyes for allegedly soiling her body.

While the children were rescued and taken into protective custody by the Office of the Public Defender of the state Ministry of Justice, Nnachi was arrested by the police from the Ejigbo division.

PUNCH Metro learnt that the 29-year-old trader allegedly tortured Vera, a primary four pupil of Ola Olu Montessori School, because she went to play after returning from the school on February 7, 2018.

It was gathered that the children’s mother died in 2012 after she gave birth to Favour.

A neighbour, identified simply as Olajide, was said to have reported the case at the Ejigbo Police Division and the suspect was apprehended.

Olajide told the police that Nnachi had been maltreating the children for a long time, adding that Vera’s groans on that day prompted her to make a report.

He said, “It was a neigbour who called my attention to the maltreatment of the children by their stepmother. I witnessed the torture of the girl (Vera) by her stepmother. She beat her for about three hours on that day. I was sad and informed the community development association chairman who advised that that we should report the case to the police.”

Vera said she had returned from her school – some distance away from the house – on the day with Favour, but returned to the school premises to play.

She said when she returned home around 3.30pm, she met her stepmother, who beat her up with a stick for playing on the street.

The girl added that Nnachi put a knife in a burning liquefied petroleum gas (cooking gas) for some minutes and pressed it on her back.

She said, “On Wednesday, February 7, after the school closed, I went back to the school compound to play and came back home around 3.30pm. When my stepmother returned from her shop in Isheri Osun, she asked me why I left home to play on the street. I told her that I was playing at the school compound, but she said I was lying.

“She started beating me. She put on the cooking gas and placed a knife on fire. She put pepper in my eyes and I could not see again. She then pressed the hot knife on my back. I cried and felt pains.

“The following day, my younger sister woke up in the morning with faeces on her body. She (Nnachi) beat her and put pepper in her eyes too. Our father had travelled when the incidents happened.”

The suspect, the mother of one, in her statement to the police reportedly confessed to assaulting Vera, adding that she did not treat her injuries.

She said, “Favour and Vera have been living with me since 2014 when I got married to their father. I was told their mother died in 2012 after Favour’s birth. On February 7 around 3pm, I came back from my shop in Isheri Osun and met only Favour and my two-year-old child, Dominion, at home.

“I checked everywhere, but did not see Vera. When she later came back, I asked her where she went to. She said she went to another street. As I wanted to beat her, she ran away. Her school proprietress brought her home. When the proprietress left, I put fresh pepper in her eyes and pressed a hot knife on her back several times. Vera was the one who took care of her sister and my son when I had gone to the shop.”

A police prosecutor, Sergeant Koti Aondohemba, brought the defendant before an Ogba Magistrate’s Court on Tuesday on five counts of assault.

Aondohemba told the court that the offences contravened sections 10(b)(c)(d) of the Child Rights Law of Lagos State of Nigeria, 2015.

The charges read in part, “That you, Chidima Nnachi, on February 7, 2018 around 3.30pm, on Aso Rock Street, Brucknor Estate, Ejigbo, Lagos, in the Lagos Magisterial District, did inflict injuries on one Vera, 10 years old, by burning her back with a hot kitchen knife and caused her bodily harm.

“That you, Chidima Nnachi, did unlawfully assault one Favour, five years old, by flogging her all over her body and inflicting injuries on her back and face, thereby committing an offence punishable under Section 10(c) of the Child Rights Law of Lagos State of Nigeria, 2015.”

The defendant, however, pleaded not guilty to the charges and elected summary trial.

Posted by Unknown at 12:06 pm
Email ThisBlogThis!Share to TwitterShare to FacebookShare to Pinterest
Labels: Crime