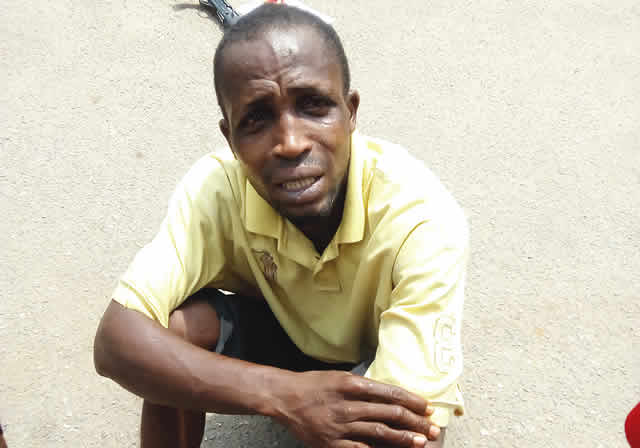 A seven-year-old boy has testified against his father, Olusegun Adefemi, who was arrested for allegedly defiling his own three-year-old daughter.

While the suspect, a bricklayer, denied the allegation, his son gave a graphic illustration of how the father slept with his sister “five times.”

PUNCH Metro learnt that the suspect and his wife separated about a year ago while their three children lived with him in Ijede, in the Ikorodu area of Lagos State.

He was apprehended by the Lagos State Neighbourhood Corps on Friday after a tip-off from a neighbour and was handed over to the police.

The state Commissioner of Police, Edgal Imohimi, who paraded Adefemi on Monday at the command headquarters in Ikeja, said the suspect inflicted injuries on the victim’s private parts as a result of forceful penile penetration.

The CP stated that the girl had been referred to the Mirabel Centre at the Lagos State University Teaching Hospital, Ikeja, for treatment.

Imohimi said, “On February 2, 2018, one Adekoya Sesan, a neighbourhood corps official attached to the Ijede Local Council Development Area, Ikorodu, reported that one Olusegun Adefemi defiled his own three-year-old daughter.

“The suspect, who separated from his wife last year over issues relating to spousal abuse, inflicted grievous injuries on the private parts of the child as a result of forceful penetration.

“Two older siblings of the survivor were luckier, as Olusegun Adefemi regularly abused them by beating them with a cane each time they resisted him from penetrating them through their anuses.

“The victim has been taken for examination and treatment, while her siblings, aged five and seven, have been placed in a temporary home. The suspect will be charged to court at the conclusion of investigation.”

The 32-year-old suspect denied the defilement allegation in tears, but confessed to beating the children.

He said he was surprised at how the daughter came about the injuries to her private parts.

He said, “I am a bricklayer. I was accused of sleeping with my child; but I did not do it. I usually travel for work and spend three days. I put them in the care of my neighbour, Iya Amoda. I am concerned about their upkeep and that is why I go to work regularly.

“I was planning to take them to my grandmother when a neighbourhood official came on Friday and said I slept with my child. I didn’t do it and I cannot do it. My wife left us over a year ago and I have been taking care of them.

“I don’t know who to hold responsible for the injuries (to her private parts). I beat them whenever they do something bad.”

However, the suspect’s eldest child, who was brought from protective custody after the parade, told journalists amid gestures that the father actually slept with his sibling.

He also alleged that his father attempted to penetrate him and his younger brother through the anus.

He said, “My daddy slept with my sister from here (points at the private parts). He put her on the ground and then did it. It was not once; it was five times. He beat my younger brother and me because we did not allow him to do it to us.”

The boy could not field more questions from journalists as he was taken away by the police.

Posted by Unknown at 11:55 am
Email ThisBlogThis!Share to TwitterShare to FacebookShare to Pinterest
Labels: Crime