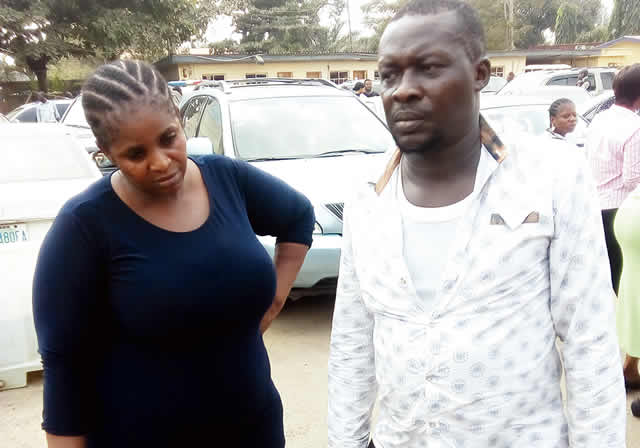 The Lagos State Police Command has arrested a couple on Treasure Palace Close, in the Igando area of the state, for allegedly harbouring pregnant women and selling newborn babies.

The couple – Adeola Adebayo, 50; and 40-year-old Binta Adebayo – were arrested on Sunday by operatives of the Federal Special Anti-Robbery Squad of the command.

Three heavily pregnant women reportedly took into illegal custody by the couple were also freed by the police.

They were identified as Favour Osikwemeh, 19; Precious Emmanuel, 27; and 25-year-old Onome Oputi.

The police alleged that the couple had sold several babies and had planned to exploit the expectant mothers upon delivery.

Osikweme, who is seven-month pregnant, said a friend, Lepa, took her to Binta in December 2017 to stay with the woman until she put to bed.

She explained that Binta had yet to acquaint her with the plan to sell her unborn baby.

She said, “I was not told it is a baby factory. I was staying with my friend called Lepa. She told me that her apartment was too small and she took me to the woman’s house to give birth to my child.

“I have been with the woman since December 2017. She (Binta)told my mum that I was working for her, but we didn’t negotiate payment for my child.”

Emmanuel said she was pregnant for a foreigner, adding that her sister introduced her to the baby factory.

“My sister took me to the woman after I was impregnated by a foreigner. The woman then promised to settle me as soon as I am delivered of my baby,” she said.

When paraded on Tuesday at the Lagos State Police Command headquarters in Ikeja, Adeola said he was not aware his wife ran a baby factory, claiming that they were not living together.

Binta, who also identified herself as Nene Okoro, said the pregnant women were workers in a shop where she sold drinks wholesale.

She said, “I am not running any baby factory. I have never sold any baby. Two of the three women only helped me with my business. They help me sell drinks at the shop. They don’t stay with me.

“The other woman (Oputi) is my daughter-in-law, and she has been living with me for over four years. She is my son’s wife who is now in Cameroon and she has two children for him. If I sold babies, how come I didn’t sell my two grandchildren?”

The state Commissioner of Police, Edgal Imohimi, said the suspects usually sold children without their mothers’ consent, adding that they would be handed over to the National Agency for the Prohibition of Trafficking in Persons for prosecution.

He said, “They harboured young pregnant ladies until they are delivered of their babies. Afterwards, these babies are taken from them and sold without the consent of the young mothers.

“The victims will be handed over to NAPTIP for care, while the couple will be prosecuted.”

Posted by Unknown at 11:07 am
Email ThisBlogThis!Share to TwitterShare to FacebookShare to Pinterest
Labels: Crime