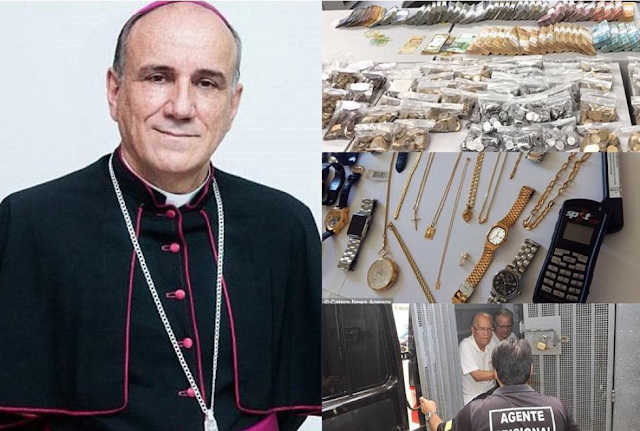 Brazilian police on Monday arrested the Bishop of Formosa, Jose Ribeiro, on allegations that he, along with other Catholic clergymen, stole about 2 million reais ($608,000) from church coffers.

A police raid on one of the priests' home saw officers prise open a false wall in to find some £19,200 in plastic bags hidden in a secret storage space.

It's alleged the money was stolen over a three-year period from tithes, donations, fundraising events and from fees collected for ceremonies such as baptisms and weddings.

According to state prosecutors, the bishop, who was appointed to the Formosa diocese in 2014, is suspected of leading a sophisticated scheme that diverted funds from church coffers.

The investigation into the Formosa Diocese accounts began last year after members of the congregation alleged irregularities and misuse of assets by the Catholic Church.

Posted by Lawrencia at 8:37 am
Email ThisBlogThis!Share to TwitterShare to FacebookShare to Pinterest
Labels: InternationalNews