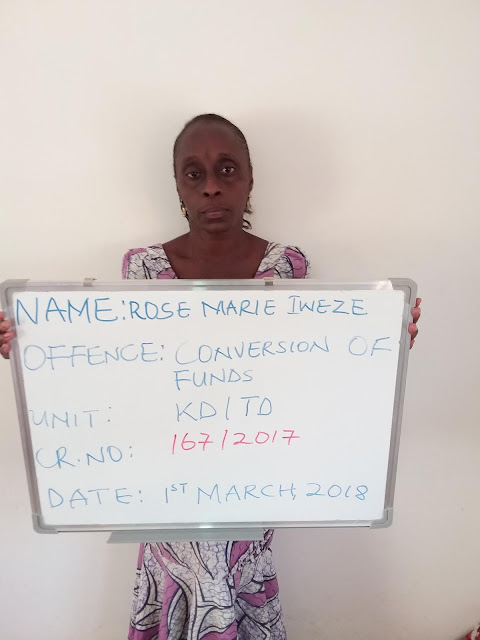 The Economic and Financial Crimes Commission, EFCC, Kaduna Zonal Office, on Friday, 2nd March, 2018, arraigned a legal practitioner, Rose-Marie Iwezie, before Justice Tukur of the Kaduna State High Court on a one count charge of criminal breach of trust and conversion of funds to the tune of N4 million.

The petitioner alleged that sometimes in April 2016, he instructed Rose Marie Iweze to sell his property located on ring road unguwar rimi, Kaduna, at the rate of N30 million. After selling the property, the accused remitted the sum of N26 million to him leaving a balance of N4 million and all efforts to get her pay his remaining balance proved abortive.

Investigations revealed that Rose Marie Iweze, a lawyer practicing under the name of Rose Marie Iweze & Co. plot G5, Ahmadu Bello Way, Kaduna, had indeed sold the property at the agreed price of N30 million in February 2017; and the money paid through her firms account domiciled in Union Bank but refused remiting same to the owner the property in full even after being paid her agreed legal fees of N1.5 million.

The accused pleaded not guilty to the charge.

Justice Tukur granted the accused bail on self recognizance and directed that she deposits her international passport with the EFCC. The judge further ruled that the accused must not travel outside Kaduna State without the permission of the court.

The matter was adjourned to 26th April 2018 for commencement of trial.

Posted by Unknown at 2:20 pm
Email ThisBlogThis!Share to TwitterShare to FacebookShare to Pinterest
Labels: Crime