Liberia Seeks 6000 Teachers From Nigeria, During His Visit at State House, Abuja 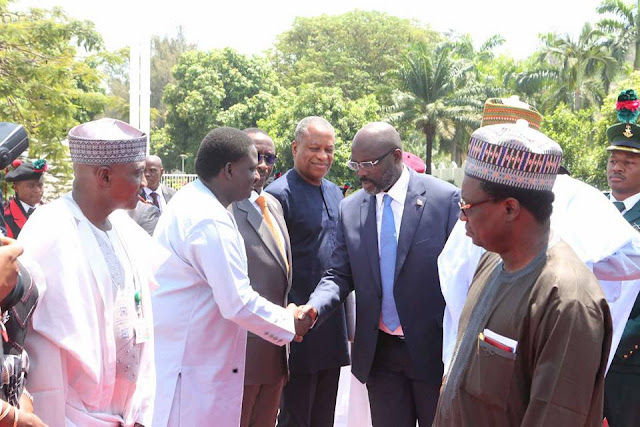 Femi Adesina, Special Adviser to the President on Media and Publicity, being introduced to President George Weah of Liberia, during the latter's visit to President Muhammadu Buhari, at State House, Abuja, March 5, 2018.

During the meeting, George Weah, has called on the Nigerian government to provide 6000 teachers to his country as part of the Technical Assistance agreement between the two nations.

Speaking Monday shortly after a closed-door meeting with President Muhammadu Buhari at the State House Presidential Villa in Abuja, Mr. Weah said his government inherited many problems which can only be tackled with assistance from countries like Nigeria.

Mr. Weah was inaugurated into office on January 22 after defeating immediate past vice president Joseph Boakai of the Unity Party.

Addressing journalists after his meeting with Mr. Buhari, the Liberian leader identified some of the urgent problems facing his country as youth unemployment, as well as the need to revive the education, agriculture, mining and health sectors.

Posted by Unknown at 7:09 pm
Email ThisBlogThis!Share to TwitterShare to FacebookShare to Pinterest
Labels: NationalNews