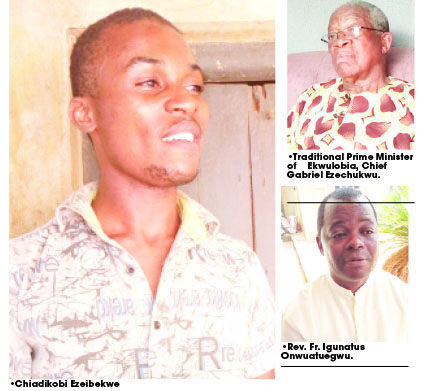 The 25-year-old Chiadikobi Ezeibekwe of Agba village Ekwulobia in Aguata Local Government of Anambra State who recently announced the marriage between him and his 17-year-old sister, Chibuzor, has renounced the controversial marriage.

Chiadi, as he is popularly called who spoke to Sunday Sun at the Community Secondary School Isuofia in the local government, declared that the marriage was no more and was not being talked about again as it stands dissolved.

His new stand came just as the Ekwulobia community and the Parish Priest of St. Joseph’s Catholic Church, Ekwulobia, Rev. Fr. Igunatus Onwuatuegwu have fixed March 24, for formal dissolution of the marriage and cleansing of the land according to the church tradition.

The young man who is a Parents Teachers Association (PTA) engaged teacher at the school had before now stood to his gun on the marriage, insisting that it was divinely directed by God.

“We didn’t just jump into this marriage thing because we can do it, God showed it to me and not only me, it was shown to other people in this family. God asked me to marry my sister yes, and I didn’t propose to my sister. Sometimes you may have vision, you just keep it, and in the process she got the same vision and spoke out because if she had not had the vision, I would not have been able to speak about it.

“I have tried to feel ashamed, guilty or sober since this thing happened, but no way. I feel fine and at home. I have asked God to make me feel bad and guilty if I have done evil, but I am not feeling any of such,” he had earlier said.

But speaking last week when he succumbed to pressure from his community, Chiadi said: “The marriage is dissolved; we are not talking about it again. We are not talking about that marriage again, let’s see what the future holds, even the Bible said we should not worry for tomorrow as tomorrow would take care of itself, so I am not bothering my heart about it.”

The Traditional Prime Minister of Ekwulobia, Chief Gabriel Ezechukwu whose intervention allegedly prevented the youths of the of the community from carrying out juggle justice on Chiadi and the sister had told Sunday Sun that he had agreed with the family and the cabinet for the church to carry out the cleansing of the land.

“I invited them again where members of the cabinet were present and we met for some days until the children admitted that they committed atrocity and started showing remorse. We told them that we have to consult the authorities of the church to find how best to purify the land. Before going to the church I sent the girl to a renowned doctor for pregnancy test and the test proved negative,” he said.

“I was once a Catholic but everything they do is under idol, there is no difference between them and idol. I was a deep person in Catholic. I discovered so many things, my father did a lot of things and you cannot chase away the devil, it is impossible. If you want to remove idols in your land, do away with everything that is idol. In our entire household no one is a Catholic now, our first son first discovered it and left the church, it is said that God will visit the iniquity of the father on the children and He has already visited us, so we are running for our lives, I’m sorry to say that, but it is a lesson.

“My father was into sorcery and magic and all the rest of them, and it is now coming upon us and we want to remove it from our generation. He was also involved in so many other things that were deep, so we are trying to clear so many things from that family, that’s even how this marriage came up, but people do not understand and they chase shadow without going to the root. I know the reason this marriage came not only to me but the entire family, just that it was like the lot fell on me and I said okay let’s accept this thing, it is a deep thing.”

He, however, insisted that nothing outside his pronouncement to members of the family about the marriage had happened.

“We just proposed to marry, we have not gone far into it, no dowry, no ceremony. We just said we have accepted this thing, let’s do it, before the thing spread and the whole noise started,” he said with regret.

Reminded that the story was that his elder brother who is the pastor of their church wedded them, Chiadi retorted: “Who joined us, who is our priest? Those things are cock and bull stories that people were telling. Join us as how, with what? It was just like you saw a woman you want to marry and you brought her to the house and all were happy, my mother was happy, and they are saying joined us, joined us where? Forget about those stories.”

However, confirming the issue of the cleansing ceremony, the Parish Priest of St. Joseph’s Catholic Church, Ekwulobia, Rev. Fr. Igunatus Onwuatuegwu said the church was ready but doubted if Chiadi would show up on the appointed day.

Posted by Lawrencia at 10:19 am
Email ThisBlogThis!Share to TwitterShare to FacebookShare to Pinterest
Labels: NijaDrama