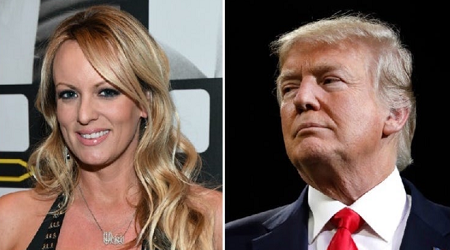 Stormy Daniels claims she softened up Donald Trump during their second meeting by spanking him and then banging him.

Stormy claims the spanking was all in good fun, and it actually opened Trump up in conversation. She says he then pitched the idea of casting her in "Celebrity Apprentice" over dinner, and that they had consensual sex afterward, allegedly without a condom.

She makes a point to say she's not a victim, and that her story isn't a #MeToo moment. Stormy also claims Trump brushed off talk of his wife, Melania Trump who'd just given birth to Barron, by saying they stayed in separate rooms, and not to worry about her.

Posted by Unknown at 7:26 am
Email ThisBlogThis!Share to TwitterShare to FacebookShare to Pinterest
Labels: InternationalNews