A suspected drug dealer ran from the Police and buried himself in the mud after he was pulled over in a car full of cocaine and crystal meth.

The suspect, Joe Hobson Jr, was pulled over on Interstate 20 near Conyers, Georgia, USA, on Thursday on suspicion of drug trafficking – but fled shortly after the traffic stop.

Rockdale County Sheriff’s Office set up a perimeter, and two hours later, the convicted felon was found with his feet sticking out of a muddy drainage creek.

Policemen fish him out. Photos: Conyers Police Department
He had buried himself there in an attempt to evade capture, only to become stuck.

Photos posted to Conyers Police Department’s Facebook page afterward show a sheepish-looking Hobson staring up from the mire, with officials working to help him up from the mud pit.

He was also photographed being carried away on a stretcher to the hospital for medical attention. 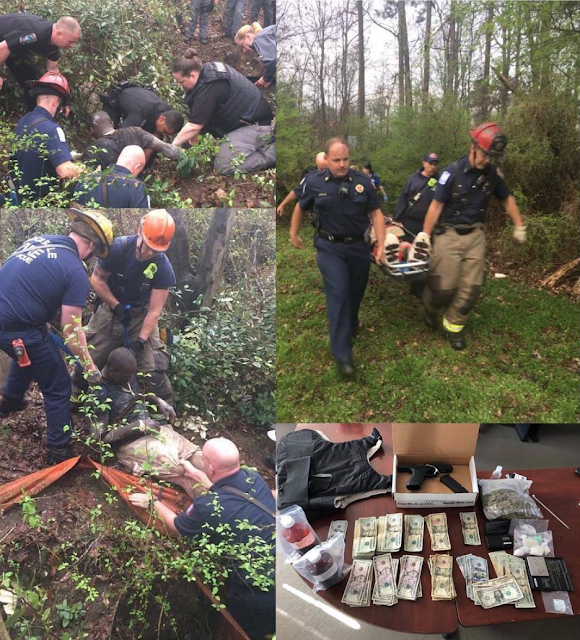 He was charged with possession of 29 grams of cocaine, seven grams of methamphetamine, 12 ounces of weed and oxycodine, as well as liquid codeine.

Hobson was further charged with possession of two handguns – one of which was stolen – and had $4,000 cash on him at the time of his arrest.

Conyers Police wrote on Facebook: “This convicted felon is now back behind bars following a rather unusual series of unfortunate events (for him) yesterday (Thursday March 1).

Proceeds of crime
“He was transported by National EMS to the hospital and confined to Rockdale County Jail before the night was over.

“Thank you to all that supported the manhunt in the rain yesterday and we are thankful for the successful outcome.”

Posted by Unknown at 9:38 pm
Email ThisBlogThis!Share to TwitterShare to FacebookShare to Pinterest
Labels: InternationalNews