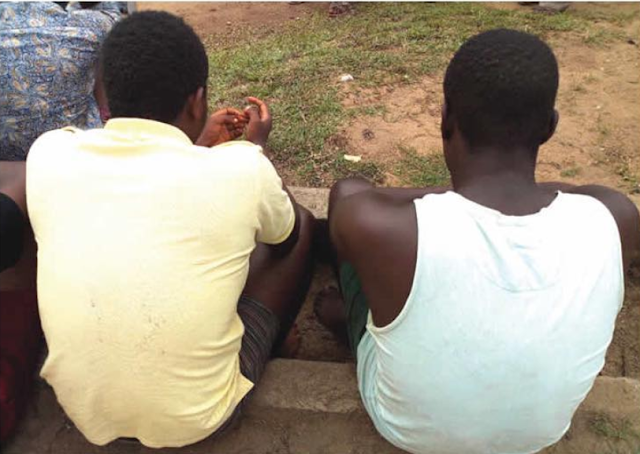 Two men, identified as Inyang Patrick, 22, and Ibah Edet, 23, suspected to have drugged a lady (names withheld) before having sex with her, have been arrested by Cross River State police command.

The two suspects, who were among 47 suspected criminals paraded by the state Commissioner of Police, Mr. Hafiz Inuwa, were also said to have gone further to blackmail her with recordings of the act.

The commissioner noted that the suspects were arrested after being reported to the police by the victim.

He said, “On February 23, 2018, the victim alleged that she was invited by one Inyang Akwanyene Patrick, male, 22, to Harris Guest House along Atimbo Road in Calabar.

“On arrival at the guest house, she met Inyang Akwanyene Patrick and Ibah Edet and was offered a bottle of drink suspected to have been drugged, which she took and became unconscious.

“Thereafter the duo forcefully had unlawful carnal knowledge of her and videoed all that transpired, which they later used to intimidate and demand ransom from the victim, threatening that they would make the recording viral to the public if she failed to comply.

“During interrogation, the suspects confessed to the crime. The phone used for recording her was recovered from the suspects and will be tendered as exhibit in court. Meanwhile, medical examination has been carried out by a qualified medical to know her health status.”

Inuwa stressed that the suspects would soon be charged to court to allow the law to take its course.

He said 45 other suspected criminals had been arrested in the past two months for various offences in the state, adding that several exhibits were recovered from them.

He explained that 10 of the suspects were arrested for armed robbery; six for murder; one for robbery; two for rape; seven for unlawful possession of firearms; eight for cultism; one for defilement and nine for internet fraud.

The commissioner appealed to the residents of the state and the general public to join hands with the police and other security agencies in fighting crime and ensuring peace in the state.

Posted by Lawrencia at 10:57 am
Email ThisBlogThis!Share to TwitterShare to FacebookShare to Pinterest
Labels: Crime