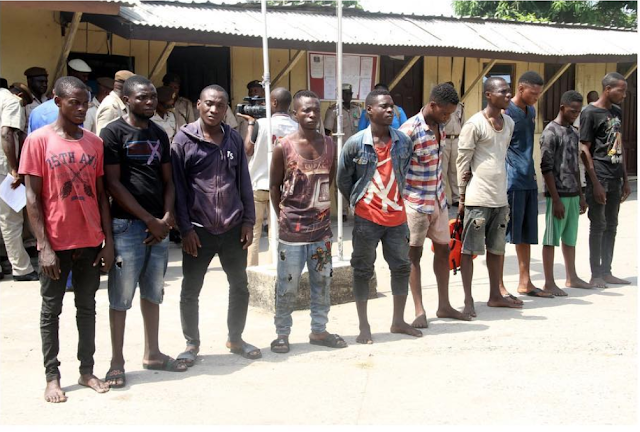 The suspects were apprehended inside two Merchant Vessels- MV MSC PAOLA and MV MAERSK CHANNIA – by officials of the Nigerian Immigration Service (NIS) and the Nigerian Navy (NN) respectively.

It was gathered that five of the suspects, were apprehended by naval personnel during routine patrol on Monday, while others were caught by NIS officers on Sunday by the Fairway Buoy.

The suspects, it was learnt, got into the vessels with the help of local fishermen, not knowing that foreign ships only sailed within West African waters.

One of the suspects, Odogun, an artiste, said he had been performing at different shows without making headway in life, adding that he thought the risk would change his destiny for the better.

Popoola, 28, said he had thought the vessel was Europe bound, adding that he was prepared to risk it all to go overseas. He said: “I will take any risk to find my way out of Nigeria. I have no job. I am doing nothing.

I believe if I can follow a ship to Europe, I can be anything I want to be. I thought the ship was going to Holland or anywhere in Europe where I could make it.”

Posted by Unknown at 1:07 am
Email ThisBlogThis!Share to TwitterShare to FacebookShare to Pinterest
Labels: NationalNews