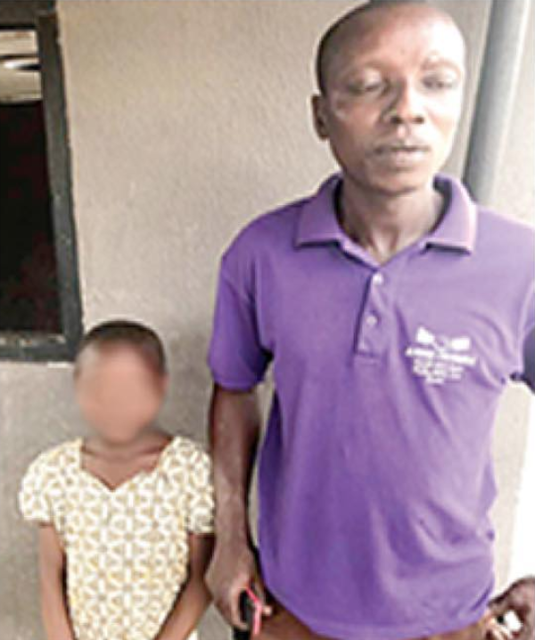 A seven-year-old girl has completely lost control of her bladder, repeatedly urinating on herself after being sexually violated by Baba Michael, a 40-yr-old neighbor who calls her ‘my wife.’

According to Newtelegraph, the incident occurred at Ilupeju PalmGroove area, Lagos State, on Tuesday. The suspect, a commercial bus driver, is said to have a four-month-old son and lives with his uncle.

The baby was the attraction for the victim. Whenever the girl goes to visit the baby, the suspect would take advantage of her. Nobody would have known about the atrocity, if not that the girl repeatedly urinated on her body during the examination.

The school management suspecting sexual violation alerted Child Protection Network. When the girl urinated on herself during the examination, one of her classmates alerted their class teacher.

The victim’s mother, Mrs. Kafaya Lawal, said that it was her daughter’s class teacher, who informed her about her daughter’s bladder control problem. She said: “It was then I knew something was terribly wrong with my daughter. I started weeping.

Before I got to her school, the management had invited Child Protection Network, a human rights group. After much interrogation, my daughter confessed that it was Baba Michael, our neighbor, who defiled her.

Baba Michael just moved into our compound two months ago. It is my daughter that usually takes care of the little baby. She also used to run errands for the man. I didn’t know something like that was happening right under my nose.

However, I noticed that the man usually calls all young girls in the compound his wife.” The Child Protection Network Coordinator, Comrade Toyin Okanlawon, said the suspect has been arrested.

Posted by Unknown at 11:09 am
Email ThisBlogThis!Share to TwitterShare to FacebookShare to Pinterest
Labels: Crime