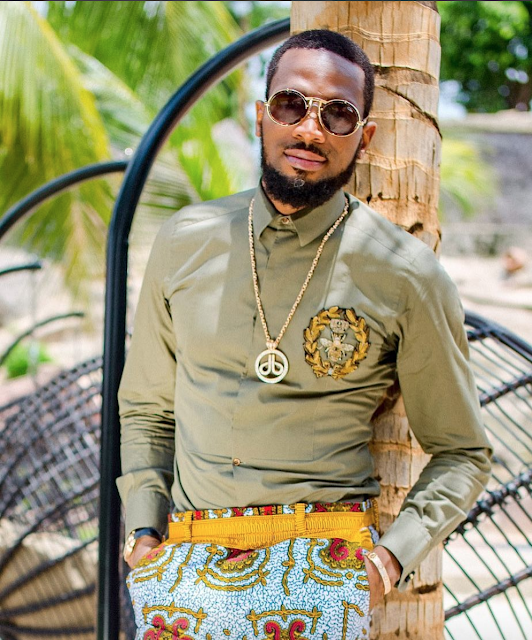 At just 37, the self-acclaimed Koko master is already growing grey hair and he’s unperturbed about the development. In fact, in an exclusive interview with Saturday Beats, he said that he did not get rid of the grey hair because ladies have told him that they love it, adding that it is a sign that he has money.

“I love the fact that I am having grey beard. In Africa, it is a sign of wisdom. I thought one had to be 50 years and above before getting it but recently, I learnt that it comes out when you are wise and have money. So, it is obvious to the world that I have money and wisdom.

“I know I am already growing grey beard and I leave it alone because the ladies tell me that it is sexy. I cannot speak for any other person but I still have my sex appeal. We were just on the red carpet together before coming to this VIP section and you noticed what happened. The ladies still flock around me despite being married. You can count how many guys greeted me compared to a large number of ladies that came to me for pictures and just to talk to me. I think it is the grace of God and the brand cannot change. It is not as if I am going to let go of this part of me. Yes, being married has changed a little thing about me but business remains business,” he said.

The Emergency singer spoke about his forthcoming tour with his former label, Mo’Hits, which includes Don Jazzy, Wande Coal, Dr. Sid, D’Prince, and Kay Switch. He dismissed insinuations that the tour was motivated by money as alleged on some online platforms. “It is not money that inspired this motive, Did Davido give us any money? No, he did not. He just called us and we obliged his request. I think it was inspired by the fans’ love for us.

“I do not know why the Mo’Hits reunion took such a long time; all I can say is that this is the right time. We had always talked about it but I guess this just happened to be the right time. As at when we were talking about it, I was in a different space facing other projects. Now is a good time. With everything that is happening at the moment, this is a perfect time and the tour could last for as long as three years, let’s keep our fingers crossed,” the Koko master said.

The pop singer said, “I had been focusing on the C.R.E.A.M platform for the last two years, even the music I was doing at the time was just to remain relevant as an active actor in the music industry. Aside from being successful in my career, my business initiative, C.R.E.A.M platform has been doing very well and I thank God for that. I also believe that its success has to do with having the right vision which is to solve a problem. I am blessed with the right team to bring my vision to life and I am grateful to them. The initiative has shown me that we have very talented people in Nigeria. We just concluded a promotion and the winners of the promotion are going to Dubai with me. Some people were chosen to just come and enjoy the Dubai experience. During the promotion, we had over 250 new songs uploaded in just one month. I do not think there’s any record label or platform that can brag about producing such a number of new music in just one month. I had to invite friends in the industry to listen and help me to judge because it was becoming very overwhelming. The two acts selected by merit are Mr. Real the Legbegbe crooner who uploaded his song on the C.R.E.A.M platform in December 2017. He needed a video and the platform shot the video for him as well as the singer, Teekay Swag, whose song was uploaded on the platform on April 5th, 2018.”

Posted by Unknown at 9:22 am
Email ThisBlogThis!Share to TwitterShare to FacebookShare to Pinterest
Labels: Gists