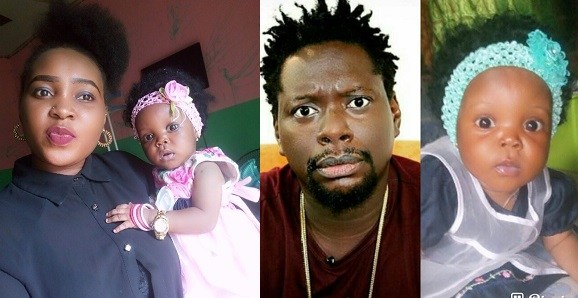 This is apparently not a good time for Nigerian comedian, Afametuna Klint Igwemma, popularly known as Klint da drunk. A lady, identified as Sandra Novo-Jacob, recently went on social media to call out the comedian for allegedly abandoning her and her baby girl.

She wrote on Facebook during the week, “Klint da drunk is the father of my child. I cannot hide it anymore because I am tired of caring for this child alone. I need him to play the role of a father to (our) child, Annora Uchechi Klint Igwemba.”

To show proof of the communication between her and the comedian, Jacob posted screenshots of her chats with Klint, bank credit alerts, and a photo of the child’s birth certificate bearing Klint’s full name.

The 26-year-old woman explained to Sunday Scoop, “We were friends on social media for some years before we eventually met in Benin in 2013. That’s all I can say about that. When I told him about the pregnancy, he asked me to get rid of it. But I couldn’t do that as I didn’t want to abort the innocent baby.”

Lamenting about how hard it has been for her to solely take care of the baby, she said, “The last time I saw him was in October 2017. Since I shared the story on Facebook, he has not reached out to me. He has not even seen the baby. I chat with him on WhatsApp, but he replies only whenever he feels like.”

Meanwhile, Klint, who is married with three kids, has not made any statement about the issue. All attempts to get Klint’s reaction to the story were abortive.

Posted by Unknown at 11:03 am
Email ThisBlogThis!Share to TwitterShare to FacebookShare to Pinterest
Labels: Gists