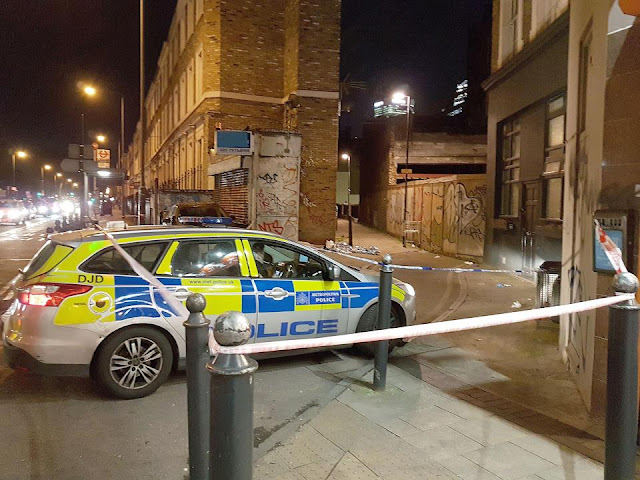 SIX teens were stabbed in just over 90 minutes last night as London reels in the rising wave of violence.

A 13-year-old has been left fighting for his life following the knifing spree that came hours after a man was attacked earlier in the day.

A man in his 20s was stabbed in Walthamstow around lunchtime, before a 15-year-old was knifed on East India Dock Road at 5.30pm and three men - two just 15 years old - were attacked in Grove Road, Mile End just over half an hour later.

At 6.57pm a 13-year-old boy was rushed to hospital in a critical condition after being stabbed in Newham, before a man in his late teens was attacked less than ten minutes later in Ealing Broadway - taking the grim total of victims to seven.

One suspect has been charged with attempted murder after the trio attacked in Mile End were knifed yesterday afternoon.

And three people were taken into custody following the stabbing in Newham.

What we know so far

Police attended seven separate knife attacks in London on Thursday
The first victim, aged in his 20s, was stabbed in Walthamstow, East London, at 12.50pm
At 5.30pm, a 15-year-old boy, whose injuries are said to be non-life threatening, was attacked on East India Dock Road, East London
Three teens – two of whom are also aged 15 – were knifed in Grove Road, Mile End at 6.06pm
One person has been arrested on suspicion of attempted murder in relation to the Mile End attack
At 6.57pm, medics were called to the scene of stabbing in Newham where a 13-year-old boy was taken to hospital in a critical condition
Three arrests have been made on suspicion of GBH with intent in relation to the attack which took place on Gainsborough Avenue, near Little Ilford Park
London's seventh stabbing victim on Thursday was attacked in Ealing Broadway at 7.05pm.
A witness said the victim, aged in his late teens, was stabbed three times, which included a wound to the chest, and lay motionless for 20 minutes as he was treated by medics

Yesterday morning 18-year-old Israel Ogunsola was named as the latest victim of London's violent crime wave after he was stabbed to death near his home in Homerton, East London, on Wednesday night.

Israel was said to be friends with 17-year-old Tanesha Melbourne who was gunned down in a drive-by shooting in Tottenham, North London, on Monday evening.

Cops today confirmed a 53-year-old man died in a Betfred in nearby Clapton, on Wednesday afternoon, after a fight erupted in the bookmakers.

The Met Police investigation the murder have made an arrest, they confirmed last night.

Scotland Yard said it is currently investigating 55 suspected murders since the beginning of 2018 - including the deaths of two children whose bodies were found in Sussex.

The Met police and London Mayor Sadiq Khan are under increasing pressure to put an end to the bloodshed after eight murder probes were launched in London in January, 15 in February and 22 in March.

Posted by Unknown at 8:07 am
Email ThisBlogThis!Share to TwitterShare to FacebookShare to Pinterest
Labels: InternationalNews