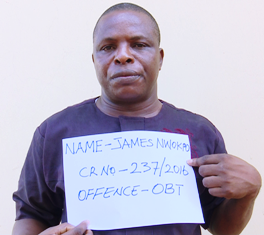 The Economic and Financial Crimes Commission, EFCC, Enugu Zonal office on Tuesday, 17th April, 2018 arraigned one James Nwokpo and Jata Gas Nig Ltd before Justice Akintayo Aluko of the Federal High Court, Abakaliki, Ebonyi State. He was arraigned on two - count charge bordering on obtaining by false pretences to the tune of (N5,695.000.00) Five million six Hundred and ninety five thousand naira contrary to section 1(1)(a) of the Advance Fee Fraud and Other Fraud Related Offences Act 2006 and punishable under section 1(3) of the same Act.

The petitioner alleged that sometime in 2014, one Barr. Francis Emeka introduced him to his brother in-law, one Mr. James Nwokpo, the MD/CEO of Jata Gas Nigeria Limited for the purpose of supplying him with Automated Gas Oil (AGO) and Petroleum Motor Spirit (PMS), which despite the payment of the said sum, the products were never supplied nor money returned to the petitioner.

Investigation carried out by the Commission revealed that the complainant paid the total sum of N5.6 Million to the accused Diamond Bank account. It was further discovered that the accused claim of losing over One Hundred and Twenty Nine Million, which was his excuse for not supplying the products as agreed was false.

It was also discovered that neither James Nwokpo nor his company, Jata Gas Nigeria Ltd was registered nor licensed by the Department for Petroleum Resources (DPR) to deal on petroleum products as statutorily laid down.

He pleaded not guilty to the two count charge preferred against him.

In view of the accused person’s plea, the defence counsel, Barr. Ugochukwu Aja Obasi who said he was appearing for the substantive counsel, applied for bail on behalf his client.

However, the prosecution counsel, Barr M. A Ekwu, objected to the bail application on the grounds that it was done orally and that the accused had earlier jumped administrative bail granted him by the Commission before his arrest at Abuja.

He therefore prayed the court to rather grant the accused bail on very stringent condition so as to forestall similar occurrence.

Justice Akintayo Aluko ruled that based on what the prosecution counsel has said, he was not going to accept oral application from the defence counsel whom he instructed to go and prepare the application formally.

He ordered the accused to be remanded in prison custody till 23rd April, 2018 for hearing.

Posted by Unknown at 7:19 am
Email ThisBlogThis!Share to TwitterShare to FacebookShare to Pinterest
Labels: Crime