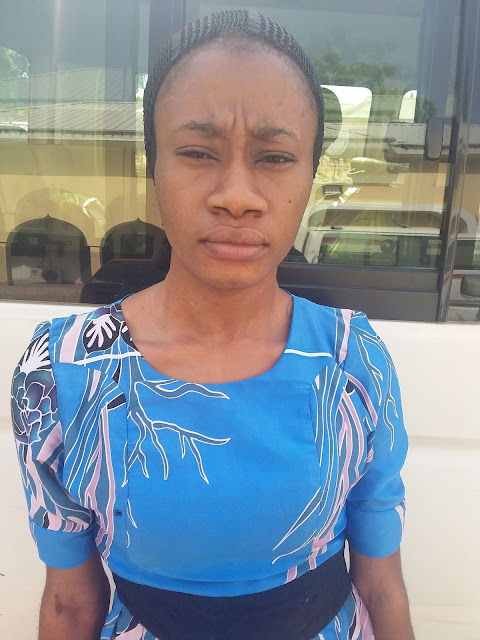 Madueke, a serving corps member posted to Kaduna and later redeployed to Akwa Ibom State was arrested at Uyo by the EFCC Operatives following a petition by one Yusuf Idris of Tumfure Quarters Gombe stated.

The petitioner stated that on the 21st March, 2017 the defendant and the others at large conspired among themselves and obtained the sum of N63,000.00 under the false pretence that the said sum was to secure a job for him with the Nigerian Customs Service which they never did; instead, converted same to their personal use.
Investigation revealed that a member of the syndicate, Yusuf Maarku, the acclaimed recruitment officer gave the complainant a Union Bank Number 0053158443 bearing Maduako Ugonma Chinomso through which the said sum was deposited as form, uniform and registration fee.

Further investigation revealed that there are six different account in different banks with huge amount of money which the suspect operates.

When the charges were read to her, she pleaded not guilty; the prosecution counsel A. M. Labaran to applied for a date of trial.
Justice Jauro while adjourning the case to Monday, 16th April, 2018 for hearing of her bail application, he remanded her in EFCC custody.

Posted by Unknown at 8:30 am
Email ThisBlogThis!Share to TwitterShare to FacebookShare to Pinterest
Labels: Crime