Pastor Arrested For Robbery And Abduction Of Boy Boy 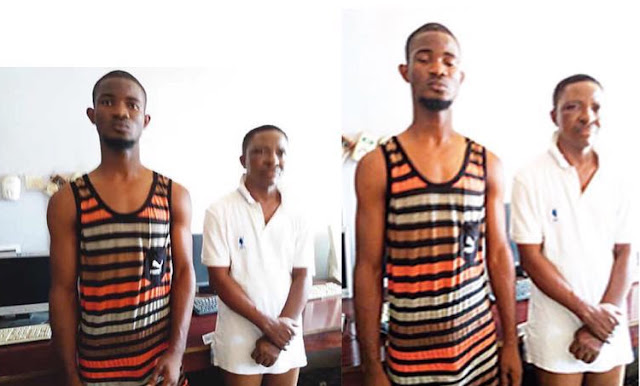 Pastor Ifeanyi Nwachukwu of Live By Faith Ministries in Ogbaku, has been arrested by the Imo State Police Command, for alleged robbery and abduction of a 17-month-old boy.

Nwachukwu 52, was paraded alongside Miracle Emenekwuru 23. They were arrested at Orji, in custody of the stolen baby.

The suspects, who were alleged to have stolen the baby from a family they robbed, were said to have been demanding ransom from the baby’s parents before their arrest.

According to Pastor Nwachukwu, Kelechi Ogobiro, son of the godmother of his own child, came to him last Saturday at about 3a.m., with the child and introduced him as his.


He explained that upon enquiry, Kelechi said he was the father of the child and that he just reclaimed the baby boy from his estranged girlfriend.

The pastor disclosed that on Monday morning, Kelechi registered the child in a school beside his house, with a promise to hire a nanny same week to babysit him.

However, Kelechi, allegedly received a phone call, telling that his school, Zenith University, Ghana, was about him to commence examinations. It was after Kelechi left for the supposed examination, that police swooped on Nwachukwu.

The cleric insisted that he didn’t know the baby was abducted, let alone that the act was done during an armed robbery operation. On his part, Miracle said he was just a neighbour to Nwachukwu and that he usually went to the pastor’s flat.

The Imo State Police Deputy Public Relations Officer, (DPPRO), Ify Ezeudeogu, said that a fourman robbery gang broke into the apartment of Vivian Iberi and robbed her on April 21, around 2am. .

The gang made away with cash, ATM cards, and their baby boy, Master Damian Chimdumebi Oluwa. Mother of the child, Vivian Iberi explained that the robbers also made away with the ATM card of her maid, through which they collected N627,000 ransom.

According to her, after paying them the ransom, the gang demanded an extra N200,000 before it would release the child. Ezeudeogu disclosed that three other suspects were still at large, adding that police was hot on their trail.
Posted by Unknown at 11:24 am
Email ThisBlogThis!Share to TwitterShare to FacebookShare to Pinterest
Labels: Crime