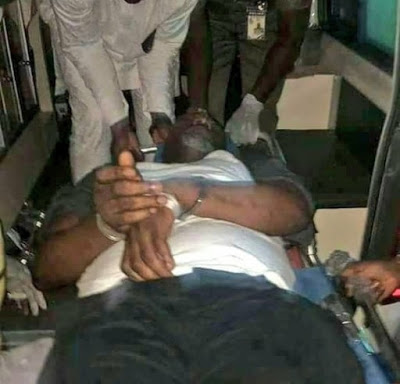 The Police have handcuffed Senator Dino Melaye to a hospital bed at the National Hospital, Abuja.

Melaye had escaped from police custody on Tuesday while being taken to Lokoja, Kogi State, and was conveyed in an ambulance to Zanklin Hospital, Mabushi, Abuja, after sustaining some injuries from his scuffle with his police escorts.

Visitors were also not allowed to see the embattled senator, who was forcefully evacuated by the police from a private medical facility, Zankli Hospital and taken to the National Hospital, where he was admitted to the Trauma Centre on Tuesday night.

Some senators who visited him on Wednesday (today) were barred by the police from entering the ward where he was being cared for.

Posted by Unknown at 8:56 pm
Email ThisBlogThis!Share to TwitterShare to FacebookShare to Pinterest
Labels: NationalNews