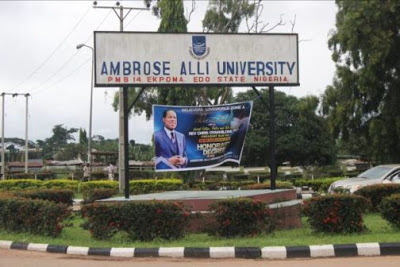 Two former students of Ambrose Alli University have been sentenced to one and two years’ imprisonment for unlawful detention of a former lecturer of the university.

The convicts, Judith Ivie Okosun and Juliet Obehi Okosun, were arraigned before a magistrate’s court in Ekpoma in August, 2012, on eight counts charge bordering on alleged conspiracy, stealing, unlawful detention and frivolous petition.

A 2010 video, which went viral on the Internet, had shown the lecturer, Dr. Peter Otubu, being stripped by Judith in a female hostel located near the university at Ekpoma.

In the video, she accused the former lecturer in the Department of Electrical and Electronics Engineering of allegedly attempting to have sex with her in exchange for a pass mark in a course.

Otubu was seen in the video being compelled to sign a N100,000 cheque in favour of “Judith Okosun” in order to secure his release.

Delivering judgement, the chief magistrate, Maltilda Iluobe, held that Juliet had admitted in her evidence before the court that she had the key to the apartment where Judith unlawfully assaulted Otubu.

The magistrate sentenced the duo to one and two years’ imprisonment respectively with an option of N20,000 fine. The magistrate however expressed displeasure over the conduct of the former lecturer for going to the room of his student, an action which she said affected his career.

Posted by Unknown at 7:30 am
Email ThisBlogThis!Share to TwitterShare to FacebookShare to Pinterest
Labels: Gists