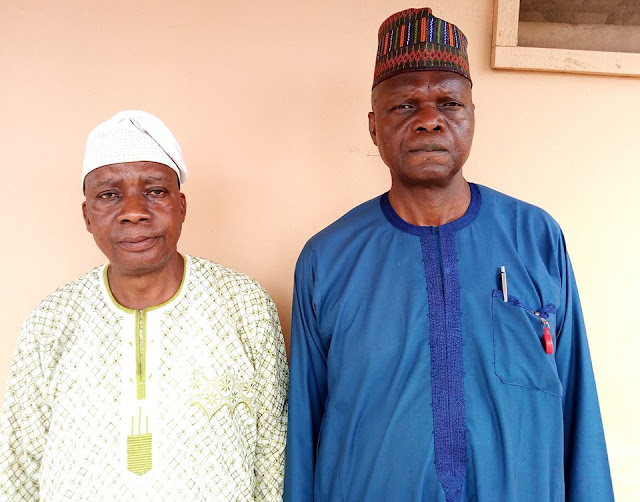 The Economic and Financial Crimes Commission, EFCC, Ibadan Zonal Office on Monday May 14, 2018 arraigned the duo of Dr. Peter Kolawole Ojedele and Ali Ahmadu, former Director General and Bursar of the National Institute for Educational Planning and Administration (NIEPA) respectively, before Justice Abdul Dogo of the Federal High Court sitting in Akure, Ondo State on 9-count charge bordering on forgery, obtaining money under false pretence and offences contrary to Section 16 (1) (b) and punishable under Section 58 (5) (a) of the Public Procurement Act, Laws of the Federation of Nigeria.

The duo, Dr. Peter (62) and Ali (61) journey to the dock followed a petition alleging that the duo whilst acting in their capacity as public officers; Director General and Bursar of the National Institute for Educational Planning and Administration (NIEPA) respectively, received in excess the sum of Two Hundred and Eight Million Naira from the Federal Government as Personnel Funds in 2011 and 2012 but never remitted the excess fund into Government Treasury. It was also alleged that the defendants claimed to have liaison offices in most states of the Federation whereas none is functional while some have no traceable address yet he allegedly claims funds for office rentage.

Investigations however revealed that the budgetary proposals for the Institute for the year 2011 and 2012 includes some fake names of staff added to the Institute and also unlawful increase in the grade levels and steps of the staff of the Institution. Also, the defendants inflated the price of the DVD duplicator they purchased for the institution.

When the charge was read to the defendants, they pleaded not guilty.

In view of his plea, the EFCC counsel, Cosmas Igwu applied for a trial date and urged the court to remand the defendants in prison custody. However, counsel to the first defendant, Abel Kosoko and counsel to the second defendant, Olushola Oke both prayed the court to allow them move an oral applications for bail. Olushola thereafter prayed the court to allow the second defendant remain in the EFCC'S custody pending the hearing of his bail application. The prosecution counsel however, opposed Olushola submission stating that the proper place for custody after arraignment is the prison.

Justice Dogo however denied the defense prayer to move an oral application for bail. He thereafter ordered that the defendants be remanded in the EFCC's custody pending the hearing of their bail applications.

One of the count charge reads: That you Dr. Peter Kolawole Ojedele and Ali Ahmadu whilst acting in your capacity as Public Officers, to wit: Director-General and Bursar respectively, of the National Institute for Educational Planning and Administration, Ondo, Ondo State sometimes in 2012 at Ondo within the jurisdiction of this Honourable Court, with intent to defraud obtained the sum of N115,380,488.24 (One Hundred and Fifteen Million, Three Hundred and Eighty Thousand, Four Hundred and Eighty Eight Naira, Twenty Four Kobo) only from the Federal Government of Nigeria under the false pretence that the sum was for staff emolument for year 2012 which pretence you knew to be false and thereby committed an offence punishable under Section 1(3) of the Advance Fee Fraud and Other Related Offences Act, 2006A

Posted by Unknown at 7:32 am
Email ThisBlogThis!Share to TwitterShare to FacebookShare to Pinterest
Labels: Crime