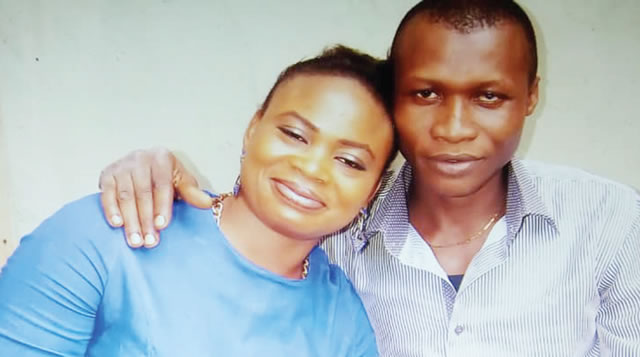 The romance of a Lagos couple has come to a tragic end after the man, Isaiah Chukwu, allegedly killed his lover, identified only as Joy.

PUNCH Metro learnt that Chukwu and Joy, both indigenes of Ebonyi State, had been living together for the past two years without formalising the relationship.

Chukwu, a spare parts dealer in Ladipo, Oshodi, allegedly killed the 26-year-old at their residence on Balogun Street, Oshodi.

He was said to have stuffed her corpse into a bin, which he put in a sack.

The 35-year-old tied up the deceased’s legs and knotted the top of the sack.

He had allegedly dragged the body around 4am to the ground floor of the house en route to a dust bin when he was accosted by some youths.

The youths, who were said to have been suspicious of the content of the sack, reportedly questioned him as the suspect shunned them.

An Islamic cleric, who was passing by, was said to have opened the sack and discovered the corpse, which caused the mob to pounce on the suspect and beat him to a pulp.

Residents, who spoke to our correspondent on Tuesday during a visit to the area, said they were shocked because although the couple had yet to have a child, they lived together peacefully. 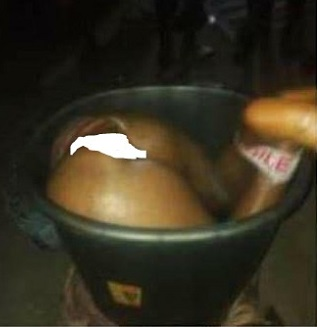 A trader, who did not want to be identified, said Chukwu had declared the victim missing some days earlier.

He said, “The one-storeyed building where they lived had been contracted to a developer, who ordered all tenants in the house to leave. They were the only tenants remaining on the first floor. Some other tenants stayed on the ground floor.

“About four days ago, he said he had been looking for the woman and her telephone line had not been reachable. Later, he said it had been switched off.

“However, around 4am on Monday, he was seen dragging something from his apartment. Because it is the Ramadan period, there are usually movements on the street by that time.

“Some boys on the street saw him dragging the sack with difficulty and they asked him what was inside it. He said it was a heap of spoiled food and he was taking it to the refuse dump which was a few metres away. They asked him to open it, but he refused.”

The trader said the youths started hitting Chukwu, insisting that he opened the sack.

He noted that an Islamic cleric, who was going for morning prayer, stopped and decided to mediate.

The cleric was said to have volunteered to open the sack.

“As he opened it, an overpowering stench from the corpse filled the air and the youths stripped the man naked and beat him up.  They were about to lynch him when policemen from the Akinpelu division arrived and took him away,” the trader added.

Another resident said the suspect might have allegedly killed Joy before Monday when the corpse was discovered.

“He rarely comes out to play with people. But on Sunday, he came downstairs and played with people for a long time, probably to escape the stench of the corpse. When people went to the room after the woman’s corpse was discovered, the whole apartment was filled with perfume,” she added.

Some friends of the deceased, who spoke on condition of anonymity, said Joy adored Chukwu and spoke fondly of him.

“They don’t fight. In fact, people always envied their relationship. The woman could be doing something and immediately she heard that he was around, she would leave it and say, ‘My oga don come. My darling don come.’ I never believed this could happen,” one of them said.

A police source said Joy was stabbed in the back.

He said, “We recovered a knife which he used for the crime and four mobile phones from the house. Although investigations are ongoing, we suspect it had to do with suspicion of infidelity.

“The man said he had called her when he travelled and a man picked the call. He said the man queried him (Chukwu) for disturbing his wife.”

The suspect, who spoke briefly with our correspondent, confirmed the source’s account.

He said, “I travelled on Thursday to attend a burial in Abraka, Delta State. I left Abraka the following day for my hometown in Ebonyi State. I called my wife around 11pm to know how she was faring. We exchanged pleasantries.

“On Monday (after he returned), as I was going to take my bath, I saw the corpse.”

A sibling of the victim broke down in tears at the Akinpelu Police Station upon hearing the news of Joy’s death.

The sibling’s husband asked that she be excused from police interview.

He, however, said Chukwu and Joy were live-in lovers.

He said, “They were not married, although he has visited her family members in the village. They have been living together for the past two years without formalising their marriage. He rented that apartment for her, while he stayed with his brothers in another house. He used to go to meet her at her apartment.

“She (Joy) had come to see my wife about a week ago to say that she was no longer interested in the relationship. But the man said he could not let go because of the money he had spent on her. My wife counselled her to consider him and she said she would think about it before this incident happened.”

The state Police Public Relations Officer, SP Chike Oti, confirmed the incident, adding that the case had been transferred to the State Criminal Investigation and Intelligence Department, Yaba.

He said, “The man has been arrested, while the corpse has been deposited in a morgue for an autopsy.

“The Commissioner of Police, Edgal Imohimi, has ordered diligent prosecution of the case. He has also advised residents not to stay in abusive relationships and report any case of domestic violence before it is too late.”

Posted by Unknown at 8:02 am
Email ThisBlogThis!Share to TwitterShare to FacebookShare to Pinterest
Labels: Crime