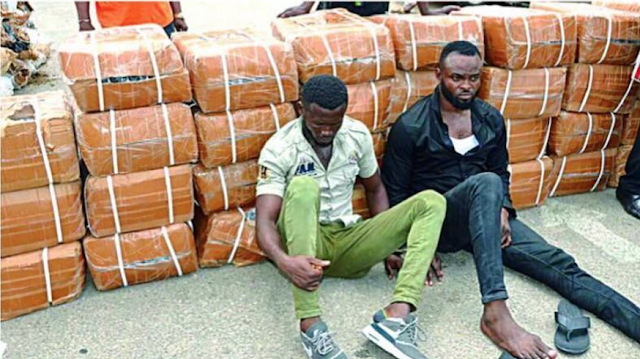 Ifeanyi Okafor, a 30-year-old businessman, has been arrested for breaking into his Chinese counterpart’s shop at the International Trade Fair Complex, Lagos State, to steal shoes worth millions of naira.

He came up with the plan after he heard that the Chinese was about to burn the shoes and move back to his country. He said: “We are business partners in the market.

The Chinese traders were the one who usually supply us the shoes after which we resell to the retailers. I was shocked when they started selling their shoes to those that used to buy from us.

Those of us, who buy from them got angry and confronted; we urged them to stop selling the shoes in that way because it would affect our business, but they didn’t listen.

When we confronted the Chinese traders, they promised to stop selling to the retailers. After we pleaded with the Chinese to stop spoiling business for us, they wouldn’t listen. We started threatening to deal with them.

They were scared that we might kill them and thus decided to burn the remaining shoes in their shop and return to their country. Immediately I got wind of that information, I informed a colleague of mine, Okonkwo Nnamdi, and we planned how to burgle their shop at night.”

He decided to divulge his plan to a friend and one of the security guards attached to the Chinese’s shop unit. Okafor and his partners in crime were attempting to cut through the locks of the Chinese’s shop when policemen appeared from nowhere and arrested them.

The Divisional Police Officer (DPO), in charge of Trade Fair Police Station, explained that he he received an anonymous tip-off from a concerned Nigerian. After Okafor was arrested, police recovered 39 cartons of shoes from him.

Posted by Unknown at 11:43 am
Email ThisBlogThis!Share to TwitterShare to FacebookShare to Pinterest
Labels: Crime