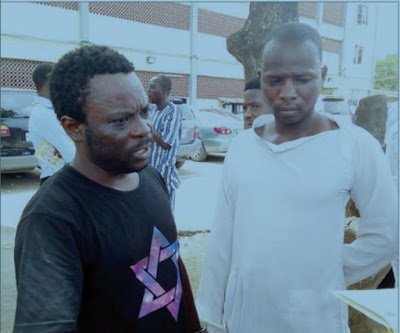 The Lagos State Police Command has arrested a prophet, Micheal Dominic, for allegedly administering concoction to a lady who visited him for spiritual healing in company with her boyfriend at the Ajangbadi area of Lagos.

The victim, Rahamat Audu, was said to have died after taking the concoction.

Dominic, who heads the Celestial Church of Christ, Jesusegun parish, Santana bus stop, Ajangbadi, was paraded by the police on Monday alongside the deceased’s boyfriend, Ifeanyi Enyinna, for alleged conspiracy and murder.

It was gathered that 25-year-old Rahamat lived with her boyfriend on Lekan Street, Shibiri.

According to the boyfriend, the deceased had on Thursday complained of having a cough and went to the church to seek a spiritual solution.

There, she was allegedly given the concoction which reportedly made her feel better for a while before her condition got worse.

He said, “On Friday, on my way to the market, the younger brother of the prophet called and told me that my girlfriend was not feeling fine.

“I met her in a very bad condition and I asked the prophet what the problem was. He told me that I needed to pay N1,500 for a spiritual work and she would also need to be on a drip. The prophet’s wife is a nurse and she told me that the cost of administering the drip would be N5,000.

“Before I knew it, she had defecated on herself. I took her to the bathroom to clean her up. On the way back from the bathroom, she fell and died.”

The Commissioner of Police, Edgal Imohimi, said the command received a complaint from the deceased’s brother, Ibrahim Audu, on May 19, 2018.

He said, “Following the development, detectives moved to the scene where the prophet and the deceased’s boyfriend were arrested. Recovered at the church were native sponges, some bottles of perfumes, candlesticks, and the concoction which was administered to the victim.

“The suspects have been transferred to the Homicide Section of the State Criminal Investigation and Intelligence Department, where evidence will be collated and properly analysed. The suspects will be charged to court for murder.

“The corpse has been deposited in a mortuary for an autopsy, while a sample of the concoction has been sent to a laboratory for analysis.”

Posted by Unknown at 8:07 am
Email ThisBlogThis!Share to TwitterShare to FacebookShare to Pinterest
Labels: Crime