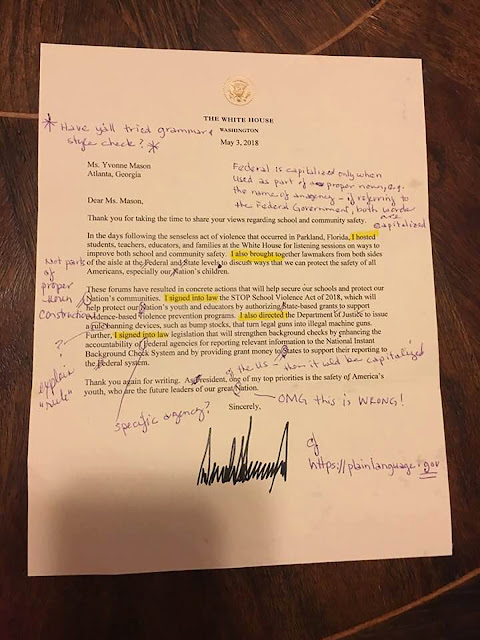 A retired secondary school English teacher has corrected a letter she received from US president Donald Trump and sent it back to the White House.

Yvonne Mason, who lives in Atlanta and was a teacher for 17 years, said the letter would have barely passed and corrected its numerous grammatical errors.

She chose not to attach a grade to the corrected letter, which included Mr Trump’s signature, and posted back to the White House.

Ms Mason argued the note – which was a reply to a note she had written about the Valentine's Day school shooting in Florida which left 17 dead – was “stylistically appalling”. She acknowledged the letter was likely to have been penned by a staff member rather than the president himself. “When you get letters from the highest level of government, you expect them to be at least mechanically correct,” she said.

Posted by Lawrencia at 10:04 pm
Email ThisBlogThis!Share to TwitterShare to FacebookShare to Pinterest
Labels: InternationalNews