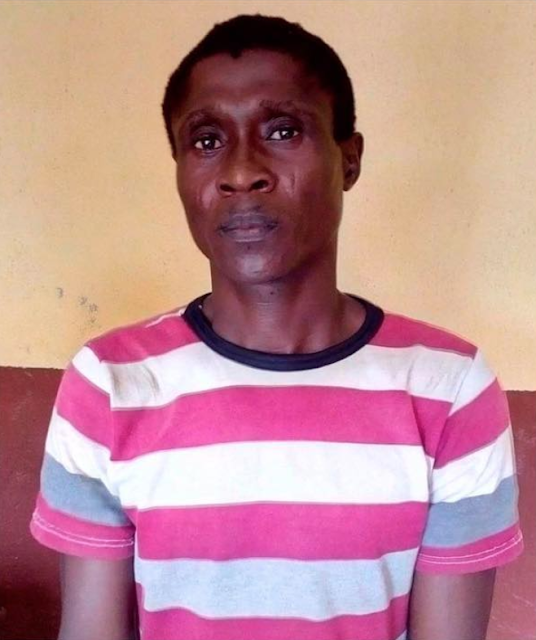 One Ifeanyi Adieme has been arrested by the Lagos State police for allegedly defiling an 11-year-old girl handed her over to him by her parents, to look after his three children.

TheNation reports that the girl who attends Iba Estate Primary School, Ojo, Lagos, on May 20, 2018, opened up to one of the coordinators of her church’s children section on how she had been subjected to sexual abuse and defilement by Adieme.

The pastor of the church was said to have reported the matter to Iba Police Station, following a medical confirmation of Adeime’s sexual abuse of the girl, and he was arrested.

Adieme, who runs a frozen food retail shop, lost his wife in January. A medical report from Igando General Hospital confirmed that the girl was actually defiled.

According to the girl, it all started on a Friday night around 10pm after Adieme’s children had gone to bed. She said: “He called me into his room When I entered he brought out his private part.

I screamed and made to leave the room, he dragged me back and warned me not to make a noise. He asked me to kneel down and began to lick. I told him I can’t do that. He hit me on the head and said that he will beat me if I don’t do it.

I started doing it; he held my head and was pushing it into my mouth. When something started coming out, I tried to withdraw but he said I should continue to lick it.

Another night, I wanted to go and sleep he called me back. He pulled all my cloth and asked me to lie down on the bed. Then he started doing it. He said that if I tell anybody that he will kill me.”

When the DPO, Gbenga Ogunsakin, confronted Adieme over the allegation, fell on his knees and begged for mercy; he said it was the devil that pushed him and more likely to be the curse that was placed on him by his wife’s relative.

The case has since been transferred to the Gender Unit of the Lagos State Police Command. The state’s Police Public Relations Officer(PPRO), Chike Oti, who confirmed the incident, revealed that the suspect will soon face the law.

Posted by Lawrencia at 9:40 am
Email ThisBlogThis!Share to TwitterShare to FacebookShare to Pinterest
Labels: Crime