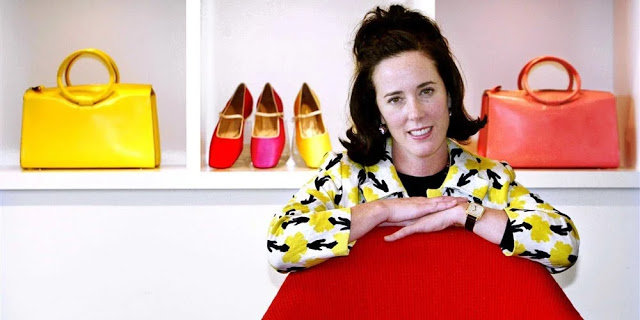 The 55-year-old fashionista's body was discovered by a housekeeper at her Park Avenue home, and it appears that she hanged herself from a door with a scarf.

"There was a suicide note left at the scene," NYPD Chief of Detectives Dermot Shea said at a news briefing. "Not going to get into the contents of that note. That appears to be the sum total of what it is at this point, but we still have detectives on the scene."

Spade launched a line of chic handbags in the early 1990s that became a global sensation, turning her company, Kate Spade New York, into a retail powerhouse with over 140 shops and outlet stores across the United States.

The bags that bore her company's iconic logo put a contemporary spin on the classic elegance of American style icons like Audrey Hepburn and Jackie Kennedy. The designs were hailed as simple yet sophisticated, setting a brightly colored and preppy fashion template for women around the world.

She was born Kate Brosnahan in Kansas City, Missouri, in December 1962, the daughter of a construction company owner and a housewife. She co-founded her company in 1993 with Andy Spade, the man who would become her business partner and husband. And over the next decade, they built it into an empire that also included shoes, luggage, stationery and other accessories.

She is survived by her husband and a daughter, born in 2005.
From NBC news

Posted by Lawrencia at 8:02 am
Email ThisBlogThis!Share to TwitterShare to FacebookShare to Pinterest
Labels: InternationalNews