60 Year Old Man Kills Daughter A Day To Her Marriage, Over Missing Torchlight 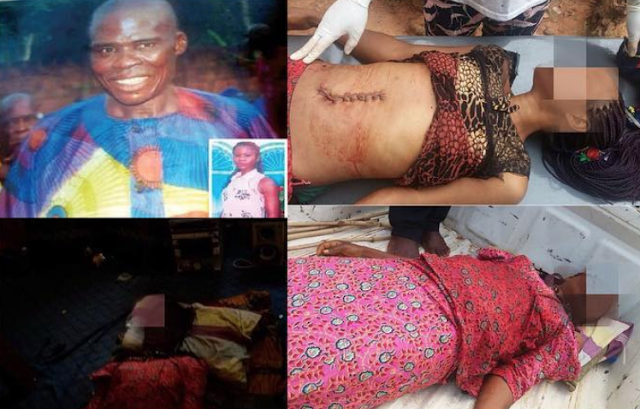 The incident, which happened at about 2am on Friday, it was gathered, was a day to Onyinye’s traditional wedding.

She said, “His children told him that they didn’t know where the torchlight was.

“He pretended that all was well and went to bed only for him to wake up around 2am, go inside his room and bring out a machete and stab Onyinye to death. This is the way he behaved each time he got drunk. He had at several times attacked his children with a machete before this incident.”

A younger brother to the suspect, Mr. Sabastine Aguluka, corroborated the wife’s statement.

He said his brother had been terrorizing members of the family, including himself.

A younger brother of the deceased, Chidaara, also said he had to stay away from the house that night after the father’s return upon suspicion that he would attack as had become his habit.

He said, “I sensed trouble when he returned and was barking at everybody. I had to leave that night for a neighbor’s house because our father would always look for the slightest excuse to molest and attack us.”

It was gathered that the suspect escaped by scaling the window on hearing that the members of the village’s vigilante group had arrived at his compound to arrest him after hearing about the incident.

The Police Public Relations Officer in the state, Haruna Mohammed, confirmed the incident.

He said, “The incident happened at about 0200 hours on Friday, and the suspect has been arrested.”

Mohammed stated that investigation was ongoing, adding that the suspect would soon be charged to court.

Posted by Unknown at 1:03 pm
Email ThisBlogThis!Share to TwitterShare to FacebookShare to Pinterest
Labels: Crime