Buhari Is Plotting To Arrest Me On False Charges, Obasanjo Cries Out 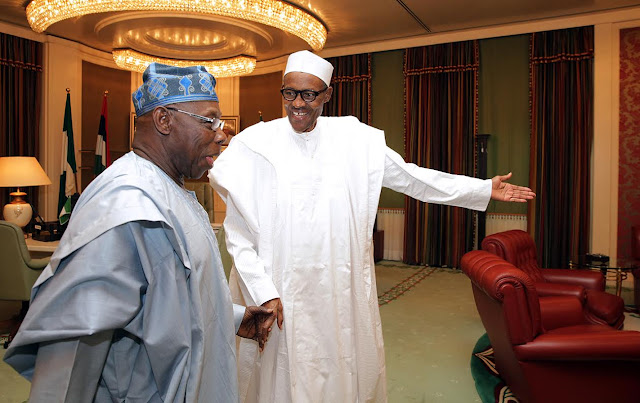 Former President Olusegun Obasanjo has accused the Buhari administration of plotting to slam false charges on him, to pave the way for his indefinite detention, Premiumtimes reports.

The former leader said the government was planning to use fake documents and witnesses against him. Obasanjo said this in a statement by his media aide, Kehinde Akinyemi, on Friday.

The claim is the latest twist after weeks of bitter exchanges between the two leaders, who fell apart after Obasanjo accused Buhari or ineptitude and corruption, and advised him not to seek reelection.

Buhari responded recently by accusing his predecessor of frittering away $16 billion on phony electricity projects. Obasanjo hit back at the “ignorant” claim.

Speaking via his aide on Friday, the former president said plans to silence him were in two-fold, among which is a plot to cause the EFCC to reopen the investigation into the activities of his administration.

He said the Buhari administration had also perfected a plan to use fake documents and witnesses against him. He said this will be a re-enactment of the Abacha era in which he (Obasanjo) was detained on trumped-up charges.

The former president said he had been told that his name was on the government’s “watch list”, and that the security of his life cannot be guaranteed.

He, however, said no amount of campaign of calumny, no matter how well contrived, orchestrated or marketed would deter him from speaking out.

The statement said the first option to silence him was to seize his international passport and clamp him into detention indefinitely, in order to prevent him from further expressing angst on the “pervasive mediocrity in the quality of governance, economic management and in the protection of lives and property by the Government”.

Posted by Lawrencia at 9:58 am
Email ThisBlogThis!Share to TwitterShare to FacebookShare to Pinterest
Labels: NationalNews