I Killed My Married Lover To Take Her Jeep – Suspect 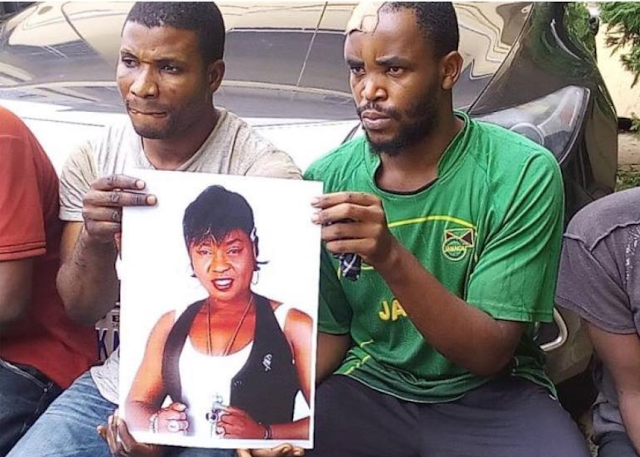 The suspects after giving her excess alcohol, killed her, butchered her body and packed it into two sacks that were later dumped in a river.

To cover their trail, the suspects also changed the number plate of the vehicle of the deceased. The deceased, Charity Chidebere Aiyedogbon, 44, mysteriously disappeared in 2016.

Giving details of how the suspects were nabbed, the FCT Commissioner of Police, CP Sadiq Bello, said: “On 1st June, 2018, Police Operatives attached to the Command Anti-Kidnapping Squad succeeded in arresting Ezengo, 27, in Benin, Edo State.

Upon his arrest, he confessed that the mother of four was his girlfriend and that he conspired with Adogah, 28, to murder her on 9th May, 2016 at about 2330hrs at Kagini.”

The Police said they were able to recover the deceased’s car and some of her properties from the suspect. Narrating his involvement with Charity and how he killed her, Ezengo said: “We met on Facebook and she told me she was divorced.

I was in a relationship with her for about a year and half. We were having issues in our relationship because I was not benefiting from the relationship. She wasn’t very rich when I met her but I knew she was comfortable and I needed my own share of her wealth.

Later, evil thoughts came into me that I should kill her and take her car. I proceeded with the thought by involving my friend, Adogah. I feel really bad for what I did but at the same time, I feel better because her spirit has been disturbing me and I believe that was why I was arrested.”

Posted by Lawrencia at 9:41 pm
Email ThisBlogThis!Share to TwitterShare to FacebookShare to Pinterest
Labels: Crime