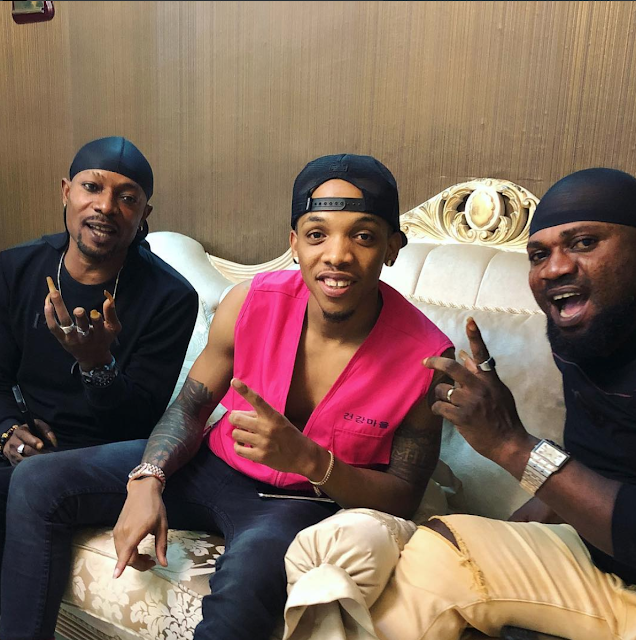 Rave of the moment artiste, Tekno, is currently having a time of his life. He has succeeded in releasing hit songs back to back. His recent project, ‘Jogodo’, is currently topping charts and enjoying massive airplay but ever since the singer released the snippet of the song on his Instagram page, it has been trailed with controversy. His critics say the song is not his original brainchild.

It was learnt that after the Danfo Drivers expressed their dissatisfaction that the pop singer did not reach out to them, he was said to have done the needful. However, the singing duo of Danfo Drivers claimed that the issue was squashed without any string attached.

But in an exclusive chat with Saturday Beats, Prof. Linkin said his issue with Tekno is far from being over till the artiste also acknowledges him as the originator of the word, Jogodo, which was the name of his album in 2003.

He told Saturday Beats that he heard rumours that the Danfo Drivers were placated with N2m for the song when they raised dust. He said, “I am the owner of that song ‘Jogodo’ and I hold the copyright to the name, ‘Jogodo’. Tekno did not inform me before he released the song and the funniest part is that after he made the song and Danfo Drivers complained, he went to meet them to apologise but ignored me. In fact, it was not until Danfo Drivers began to grant interviews to the press stating that Tekno did not inform them before releasing the song that he reached out to them after an event.

“Danfo Drivers are my friends and immediately the news broke that they had made peace with Tekno, I called them and asked why they did not tell him that I am the originator of ‘Jogodo’ but they gave me some excuses and claimed that the singer did not give them anything. I am not dead, so why would someone want to take something I worked hard to get. I am the originator of ‘Jogodo’ in the whole world. I am the only one that can tell people the real meaning of the word ‘Jogodo’. I heard rumours that Teckno paid Danfo Drivers N2m. As my friends, I asked them if it was true and they denied it. When I called to ask them, they said that he did not give them anything than apology. They claimed that they sat down, had some drinks, chatted and took pictures. If they are lying, God is watching them because I cannot read their mind,” the singer said.

Prof. Linkin further said that because they are colleagues, he would not take the case to court but he advised the singer to reach out to him and make amends.

He mentioned his own terms and condition on the matter.  “I am the originator of ‘Jogodo’. Before I sang the song, ‘Jogodo’, no one ever used the slang. It was due to the commercial success of my song that the word ‘Jogodo’ became a slang. I just want Tekno to be remorseful and admit that he made a mistake. We are all human beings. I think he or his management is feeling pompous and I do not know why. Probably Danfo Drivers told them that they own ‘Jogodo’, I just don’t know.

“I would not drag him to court but I would still monitor the situation before I take a final decision. I know dragging him to court is the right thing to do because what he did is illegal but I would wait and watch to see if he would reach out to me. All I need from him is to give me money or we should do a remix of that song together for the world to know that I am the originator of the song. Now, he is making millions with the song but I have not made a dime over my intellectual property because he is acting as if he is the originator of the song. Most of the songs these boys are singing emanated from Ajegunle but they would refine them and make them seem like their own. It is very bad and so painful,” he said.

Posted by Unknown at 8:44 am
Email ThisBlogThis!Share to TwitterShare to FacebookShare to Pinterest
Labels: Gists