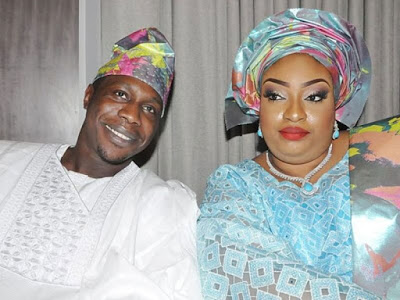 The mother of Tope Adebutu-Obasanjo has responded to her son in law,Olujonwo's recent viral story on the Blogs where he is quoted as saying he is filing for divorce from his wife of one year for assault and insult and other issues....

Tope's mum Mrs Adebutu says ''The whole story was cooked up,there was no assault anywhere..They are aggrieved because there was no material gain like they assumed they would get.

They should leave us alone,we are tired and the divorce will go ahead as reported,what i don't understand is how can a man bring his private matters to blogs?is that a man?

Tope has never hit anyone and she is very respectful...They should not tarnish my daughters name because she cannot come out and talk in the press because of her job.All these lies and press attacks were Orchestrated by Olujonwo and his mum and he has been denying that he is not the one that released the info to the press...

The former President and Chief Adebutu are not happy with the recent development at all.

She is also ready for the divorce but does not like the lies and name calling....She has never threatened his life or abused him.

Olujonwo is mentally disturbed and that is what the problem is now and he is also being manipulated by his mother..

I have called Obasanjo this morning to register my displeasure at all the lies,I have told him they should leave my family alone.Topes father was called in London today as well and he is not happy at all with all these lies.
if a mother has the interest of her son,even if you don't want him to marry someone again,why take it this dirty?Get someone else for your son and stop dragging my daughter in the mud.

After this lavish wedding and everything it is a pity that Taiwo and her son have messed this wedding up,Olujonwo is on drugs and we didn't know before now but now a lot has come to light...It was even the younger sister that reported to Obasanjo that Olujonwo is on drugs before he knew about it....He is in rehab but at home in Ikoyi,the doctors are treating him at home..Let him come and swear that he is not in rehab.

When they were living together,Sometimes he didn't allow his wife go into his room cos of the drugs he takes...

His mother is not a good woman,she should look for somewhere to sit down and repent from disturbing the peace in peoples homes...she has called me all sorts of names,A vulture and a snake but she is worse than the names she called me...I am not in a cult like her and i am not into 'wushy-wushy' like her ,i am all for Jesus and my hands are clean...I don't go around doing defamation of character like her.

She is not happy that after collecting over 4 million from Tope's father she cannot collect more cos she has spoilt herself. How can a mother use her son as a bait for financial gain?''

''Olujonwon was given a contract by Tope's brother but it wasn't enough for him, he is angry that he has not gained anything financially from the marriage.

I have told Obasanjo also that we are done with this....Olujonwo is denying that he put the story out there but we are used to this pattern from him and his mum but we don't care anymore.....

I have kept quiet all these months because i am not one to stoop low but i cannot sit back and watch them lie on my daughter because they know her Job as a Judge cannot let her respond.

We will meet them in court to clear up all these lies and give them the divorce they want''.She rounded up.

Posted by Lawrencia at 10:21 pm
Email ThisBlogThis!Share to TwitterShare to FacebookShare to Pinterest
Labels: Gists