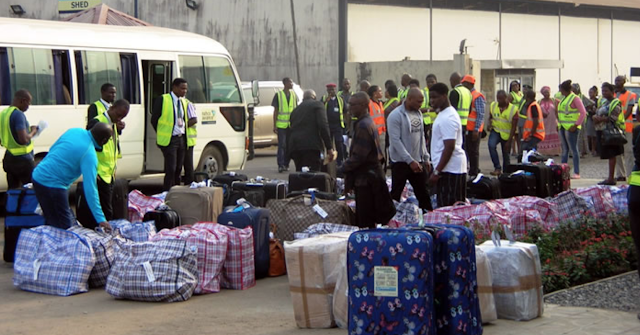 Twenty-nine Nigerians were on Thursday deported from six European countries over issues related to immigration offenses.

They were deported from Austria, Switzerland, Belgium, Germany, Norway, and Lithuania.

The News Agency of Nigeria reports that the deportees arrived at the Murtala Muhammed International Airport (MMlA) Lagos about 7.35am.

The deportees, all men were brought in a chartered Titan Airways aircraft with Registration Number: G-POWD.

Alabi said, “this morning, we received 29 Nigerians who were brought from Europe. They were all males.’’

“28 of the deportees were alleged to have committed immigration-related offences while one of them was allegedly involved in a police case.’’

He said the deportees were received by officers of the Nigerian Immigration Service, the National Agency for the Prohibition of Trafficking in Persons and the Nigeria Police.

Also on ground to receive them were officials the Federal Airports Authority of Nigeria and the National Drug Law Enforcement Agency.

NAN gathered that the deportees were profiled by immigration authorities and were allowed to depart to their various destinations.

Posted by Lawrencia at 7:21 pm
Email ThisBlogThis!Share to TwitterShare to FacebookShare to Pinterest
Labels: NationalNews