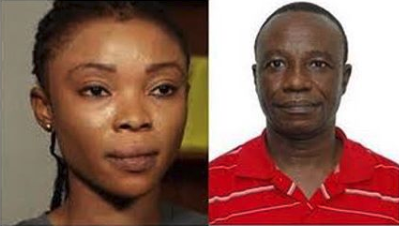 After being sacked by the management of the Obafemi Awolowo University (OAU), Ile-Ife, Richard Akindele, a professor of Management Accounting, has finally broken his silence on events that culminated in his dismissal

He was recently dismissed after being found guilty of sexual harassment of a postgraduate student of the institution, Monica Osagie.

In his reply to a query issued to him by the university, Akindele explained that the five rounds of sex demanded from Monica, as revealed by the leaked audio conversation between them, was a deliberate attempt to discourage the student and at the same time invite her to his office to obtain evidence.

According to New Telegraph, he revealed that the demand for five days of sex was a deliberate attempt to play along with the student. The university did not, however, buy his argument and dismissed the professor.

Evidences submitted by the professor to the investigative panel include screenshots of WhatsApp conversations including nude pictures allegedly belonging to Osagie.

Akindele claimed that the two photos, an alleged screenshot of Osagie’s private part, were sent to him to arouse his sexual pleasure.

According to the WhatsApp messages presented by the lecturer, Osagie had allegedly initiated conversation with the lecturer at about 5:52a.m. on Sunday, February 25, declaring her interest in the lecturer.

She then sent him seductive messages, including nude photos. The dismissed professor said it was only unfortunate that the girl was faster in implicating him. New Telegraph’s effort at getting comments from Osagie were unsuccessful.

She refused to comment on the matter, accusing the media of attempting to wage a media war against her.

In his response to enquiries from NewTelegraph, the university’s Vice-Chancellor, Eyitope Ogunbodede, confirmed that the institution received the seductive messages by Ms. Osagie to Mr Akindele.

According to Ogunbodede, the evidences showed that the two were found culpable, but that in the circumstance, there was a weaker partner and a stronger partner.

Posted by Lawrencia at 7:46 pm
Email ThisBlogThis!Share to TwitterShare to FacebookShare to Pinterest
Labels: Gists