Photo: Wife Fakes Kidnap With Her 18-Year-Old Daughter To Defraud Husband Of N15m 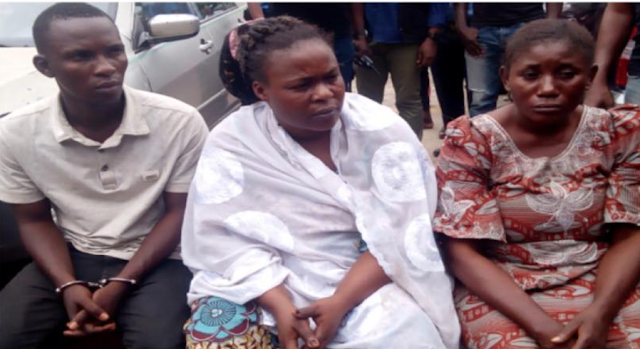 One Hadijat Kabir has been arrested for faking her kidnap with her 18-year-old daughter to defraud her husband of N15 million.

Her husband, Kabir Muraino, had reported the case at Ikotun Police Station on August 2, 2018, before the suspect was arrested.

He reported that his wife and daughter, Hamidat Kemi, who is of unsound mind, were kidnapped on the same date on their way to Psychiatric Hospital, Oshodi, Lagos.

He added the kidnappers were demanding for the sum of N15million. Based on this, the Anti-Kidnapping Squad swung into action and arrested some of the suspects in Ado-Odo, Ogun State.

When one of the hostages, Hadijat, was being debriefed, she confessed that she planned her kidnap with the suspects arrested, to defraud her husband.

Posted by Lawrencia at 9:54 pm
Email ThisBlogThis!Share to TwitterShare to FacebookShare to Pinterest
Labels: Crime