Photos: Senator Akpabio Visits Buhari In London, Ahead Of His Defection From PDP To APC 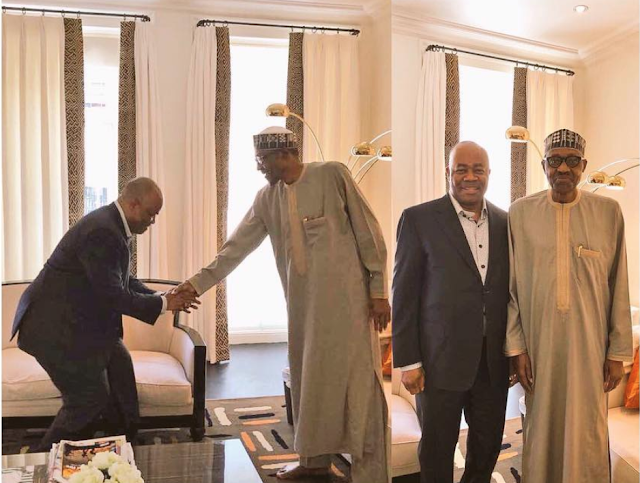 All things being equal, former Senate Minority Leader, Senator Godswill Akpabio, may leave the Peoples Democratic Party (PDP) this week and join the ruling All Progressives Congress (APC), a presidential aide has disclosed.

Akpabio, who has already taken some conscious steps as regards his anticipated defection, was said to have met with Buhari in London, where the president is currently spending a 10-day vacation. The former Akwa IIbom State governor had earlier met with Osinbajo in Abuja last week, in what is believed to be to a move to properly situate his defection plan.

But sources within the PDP, which appeared not to be disturbed by the development, dismissed Akpabio as one big mole it had to deal with over time, noting that he has divulged virtually all the party’s plans and strategies to the opposition in an alleged attempt to secure protection from prosecution.

Meanwhile, THISDAY has gathered that Akwa Ibom State Governor Udom Emmanuel did not receive the news of the proposed defection of his godfather well but has resolved to move on regardless.

Sources noted that the relationship between the two leaders was not very cordial, as they have had to expose their differences over political and financial matters.

THISDAY learnt that other PDP governors in the South-south had also promised to rally round Emmanuel, saying they would not allow the federal government to intimidate him through Akpabio.

Posted by Lawrencia at 12:40 pm
Email ThisBlogThis!Share to TwitterShare to FacebookShare to Pinterest
Labels: NationalNews