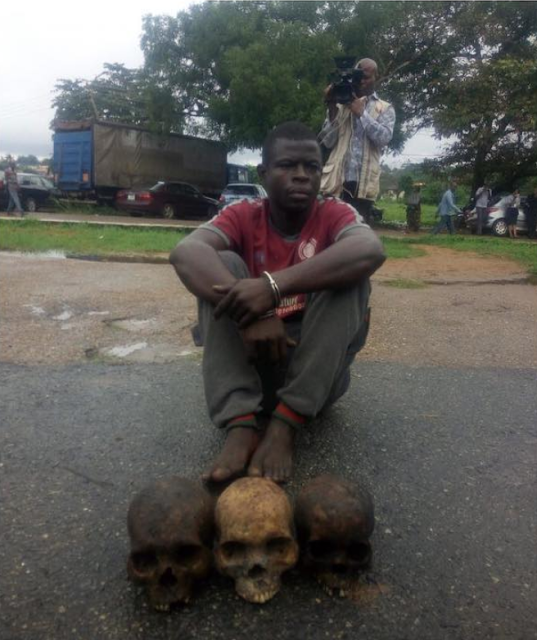 A 27-year-old man has been arrested with three human skulls by the Oyo state police command.

Sodiq Rasheed was arrested with the exhibit along  Ijebu-Ode/Idi Ayunre road in Ibadan.

Parading the suspect, the state commissioner of Police, Abiodun Odunde said the suspect was caught during a raid by the anti-crime patrol team of the Iyaganku Command on  25th July.

He added that his accomplice, an Islamic scholar, Alhaji Hadi, is still at large. While speaking with newsmen, the suspect said:”It was Alfa Hadi that lured him into it.

I helped him to do something and after we discussed, he told me to bring human skull for a money-making ritual. I succeeded in getting the three head at a cemetery located in a bush in Omi Adio area, but after I was caught, Alfa has ran away.”

Posted by Lawrencia at 9:51 pm
Email ThisBlogThis!Share to TwitterShare to FacebookShare to Pinterest
Labels: Crime