SACRILEGE! – Mother And Her 2 Teenage Twin Daughters Pregnant For One Man 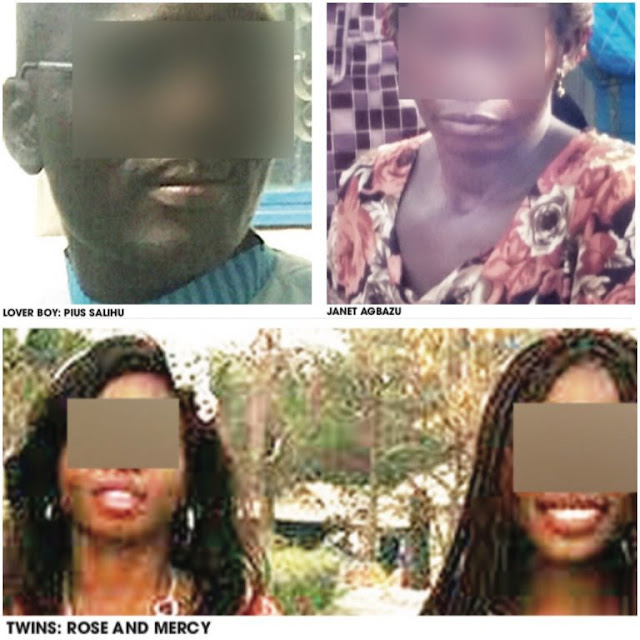 Life has become a conundrum for Janet Agbazu, 45 and her 16-year-old twin daughters who found themselves in a mess that beats even the absurdities of the Shakespearean drama. That the widow and her daughter are all pregnant is not the issue, but that they were all put in the family way by the same man.

What’s worse, the villain, a character called Pius Salihu was literally a member of the family––the mother’s live-in lover and for two years, a father figure to the 16-year-olds. Presently, the three women, forced by fate to play actors in this drama of the absurd, are covered with shame. As for the villain in the plot, he is free and abroad, at large.

Pius Salihu moved through the family like a hurricane and reduced the lives of the three women to ruins, leaving them with regrets and recrimination and a very big problem that is now a Gordian knot for the family.

The woman at the centre of the storm
Janet Agbazu, the central figure in this incident, hails from Doma Local Government Area of Nasarawa State. Alago by tribe, she was educated at Government Science Secondary School Lafia and married at 19.

Her husband, Sylvester Anangba, an Eggon from Lafia Local Government Area of the state, died in the 2013 Ombatse crisis that engulfed Nasarawa State.

Until his death, he ran a thriving transportation business. The holder of National Certificate of Education (NCE) from the College of Education Akwanga had met his wife at her secondary school when he did his teaching practice. He married her shortly after she wrote her final examination.

The couple had their first childbirth two years after their marriage and after the ‘double blessing’ of twins, they never had another child––not for lack of trying, though––until the tragic death of Anangba in 2013.

At the time of their father’s death in the Ombatse upheaval, the twins were already in secondary school.

But the family found themselves in a precarious position when relatives of their late breadwinner confiscated his properties––including a house and three cars as well as cash and other belongings.

Left in the lurch by her in-laws, the widow got a lifeline from the associates of her late husband who raised her some money so she could start doing business and therefore was able to sustain the education of her two daughters in public schools.

The family seemed to have found their feet. They were ‘gently rowing their boat down the stream of life’ until a wolf in sheep clothing found his way into their fold and capsized their boat. Today, mother and daughters are at a nadir.

Enter the villain
It was in 2016 the widow met Pius Salihu. An Igala from Kogi State, Salihu, 42, was in Nasarawa State to run a Non-Governmental Organization (NGO) that focused on women and health. They met at the Lafia township stadium where both of them went to watch a premier league match.

Their relationship started from there and in six months blossomed to the point whereby Salihu, who was squatting with a friend, was encouraged by Janet Agbazu to move into her rented two-bedroom apartment. They began cohabiting in one bedroom, leaving the other room to the twins.

In the next two years, Pius Salihu became the head of the family, playing the role to the letter. He bonded with the twins, constantly taking them out for relaxation. Unknown to their mother, once out of sight, he shed the toga of a father figure and transform into a lover.

As she told Saturday Sun later in an interview: “I was not always around due to the nature of my business. I always leave him at home with them, thinking they were in safe hands. I never for once thought he could do a thing like that.”

Agbazu thought Salihu used charm on the twins, saying: “How he got them so cheaply beats my imagination. Both of them took oaths not to expose the secret affairs. He got them cheap through the use of Babalawo (herbalist) charm.”

She raved further: “It is unthinkable and unbelievable. He was sleeping with me and my daughters at every opportunity. It was a bad thing. After he succeeded in impregnating me and the two of them, he ran away. I can’t find him.”

The whole truth, nothing but the truth
Saturday Sun got a hint of the development on August 13, 2018, and effort to interview the family brought the reporter in contact with Mr Clement Nuanga, an uncle to the beleaguered mother of the twins. Nuanga lives in Toto and the three victims had relocated to his house in their quest for a solution to their problem.

On August 14, the reporter travelled to Toto Local Government Area, a six-hour drive away from Lafia. The reporter had an interview with Janet Agbazu, who narrated the ugly, sad development to Saturday Sun in the presence of her uncle.

Her story: “I’m 45 years old. I lost my husband to the Ombatse crisis in 2013. I am yet to be fully remarried. I live on my own with my two daughters. My husband’s brothers kicked me out of their brother’s house as a widow. It was my late husband’s friends who assisted me with some cash to start a business where I can take care of my children and myself.

“In 2016, I went into a blind relationship with one Pius Salihu, an Igala man. I was blinded by love, deceived by his fine face. I did not bother asking him to take me to his place. Though three years younger than me, he appeared to be an honest and a humble man, I accommodated him and moved him out of his friend’s house to come and stay with me. I had not met a man sexually since the demise of my husband years back, that also contributed to him getting me so cheaply.

“My daughters were old enouhg to appreciate that I needed a man in my life. I also assumed they were responsible enough to see him as their father. I thought I could trust him, so I gave him all the liberty he deserved in my house. Unfortunately, I miscalculated. Unknown to me, while he was sleeping with me, at the same time, he was having affairs with my two daughters separately. These are small girls that were not exposed sexually. He enticed them with petty things and he got them easily. He was very close to them, so he got them cheaply by taking them out regularly. He also involved them deeply in the activities of the NGO he was running in the state. Sometimes, he would bring up a fake journey to Makurdi or Abuja. He would not travel with the two of them at the same time. Unknown to me, he was secretly enjoying my daughters right in my own house, and my daughters foolishly bought into his deceit”

The endgame
“Two weeks ago, the twins persistently complained of weakness of the body and malaria fever. They complained of stomach pains too. When I asked them when last they had their periods, I was shocked to hear from them that their menstrual flow ceased in May. Meanwhile, I was four-month pregnant for Pius, which is what I had always wanted, because I need a baby boy and the test shows my baby is a boy. The test at the hospital confirmed that Rose was two months pregnant and Mercy, a month pregnant.

“I was shocked because, at 16, my daughters who are students are not supposed to be pregnant. All my efforts, including threats, to force them to reveal the identity of those responsible for their pregnancies ended in vain.

“Back at home, I was outside the house trying to explain to Pius the shame the twins have caused when I heard his phone ringing inside the room. I went in to bring it for him, but the call ended just as I picked the phone, and a text message came in. I almost fainted when I read the text. It was from my daughter telling him that ‘mummy has discovered I’m pregnant and you know the baby is your own, what do we do?’

I saw another unread text from the other twin (Mercy): ‘I can’t keep this baby for you, what do we do.’

I asked Pius about the meaning of the text messages. He became restless and claimed to have received a phone call from his office. He left the house hastily.”

That was the last she saw of him till date.

“I only needed an explanation from him so that we can decide how to solve the problem. It was guilt that sent him on the run. Now, this is the third week. His phone numbers are switched off.”

In this latter part of the interview, Janet Agbazu relapsed into a monologue: “I am really confused, if God has not taken away my husband, I wouldn’t have found myself in this shame. How can somebody be so heartless as to sleep with me and my two daughters? This is an abomination.

I’m sure he used charms on them. I don’t even know his place. I am very confused. I am tired of life. How can somebody useless me and my daughters? God will not spare him wherever he is. How do I explain to people that my twins and I are pregnant for the same man and that he is nowhere to be found? My mind is blank. I looked at life and asked, was it really worth it? I hope for death every day. I never wished to see the next day.”

The reporter asked her: Do you intend to keep the three pregnancies?

Agbazu was confused. That is why she came to her uncle to help provide the way forward.

“Before the week runs out, we will arrive at a solution, but certainly my daughters can’t keep their pregnancy for the same man,” she said.

The family’s decision
While it is imperative to get the twins’ accounts of the incident, to shed light on why they got in between the sheet with a man they knew was their mother’s lover, their uncle, Mr Nuanga, however, would not permit the interview.

He has had a closed-door interrogation with them separately, he told Saturday Sun and his findings indicated that the present quagmire is “a mistake.”

“The sexual intercourse they had with him was as a result of ignorance and lack of sex education; if they know better, they won’t have done it,” said Nuanga.

They could not actually explain what came over them, he affirmed.

The twins, according to him, had no doubt Pius Salihu was responsible for their pregnancies.

“They even told me when, how and where they had met him severally, separately and unknown to each other,” said the troubled uncle.

He also avowed that Salihu perpetrated his crime with the aid of charms.

“Because they are also confused, it is not ordinary,” he insisted.

Clement Nuanga promised to consult some of his people for advice on how to handle the problem, though he hinted that the twins’ pregnancies could be aborted while their mother keeps her own.

“This is a serious matter that I cannot rush in taking a decision,” he said.

Efforts to reach Pius Salihu on phone failed. His phone numbers were switched off.

Posted by Lawrencia at 9:06 am
Email ThisBlogThis!Share to TwitterShare to FacebookShare to Pinterest
Labels: NijaDrama