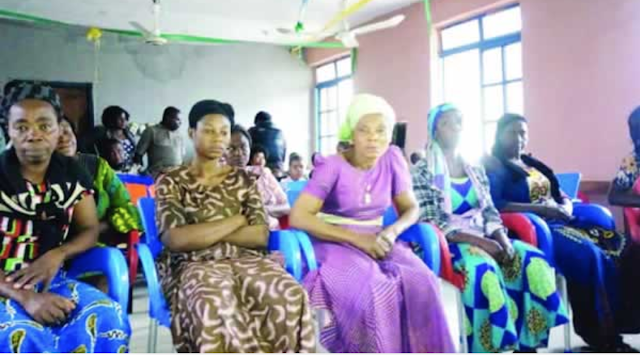 Two women, Chizoba Eze and Amaka Eze, have been arrested by the Imo State Police Command for allegedly buying newborn twins, Emmanuel and Emmanuela, for N1.8m in Umuahia, Abia State.

The women, who were said to be from Enugu State, were paraded on Monday by the Imo State Police Public Relations Officer, Andrew Enwerem, who said the suspects were intercepted on Owerri-Aba Road.

The suspects were paraded on Monday alongside six others, who also allegedly abducted and sold nine other children.

The police spokesperson, who decried the rise in the abduction of children, said there was a coordinated operation by the state command to eradicate the anomaly.

Emwerem said,  “In our ongoing onslaught against child trafficking, operatives of the command have rescued newborn twins from suspected child traffickers.

The babies
“The twins, a boy, and a girl were rescued on Owerri-Aba Road following a coordinated operation by the command.

“The suspects, who impersonated the mother of the twins, have made useful statements. We will charge them to court at the end of the investigation.”

The PPRO advised parents to be mindful of those they left their children with, saying child trafficking was an absurdity.

According to Enwerem, the crackdown on child traffickers was as a result of the community policing strategies of the Inspector-General of Police in the state.

Enwerem accused the six other women that were paraded of being in the business of buying and selling of children.

He said operatives of the Federal Special Anti-Robbery Squad in the state police command rescued nine children stolen from their parents and guardians in Owerri and Benin by the suspects.

He said other suspects were arrested in Imo, Edo and Lagos states, while their victims (children) were rescued.

Enwerem said, “Immediately the suspects steal a child, they will change his or her name to erase suspicion. So, parents and guardians, whose children are missing, are advised to report to the Public Relations Department of the Imo State Police Command for the identification and collection of their children.

One of the suspects, Eze, said she paid N1.8m through an arrangement, called sceptic pregnancy, to have the twins.

Another suspect, Ojimba, confessed that she sold one of the babies for N300,000.

A man, whose two children were handed over to him during the parade, Mike Nkwo, said they were stolen on their way to a coaching class in 2015.

Posted by Lawrencia at 12:45 pm
Email ThisBlogThis!Share to TwitterShare to FacebookShare to Pinterest
Labels: Crime