Bobrisky Deported From UK Over work Permit, Says Someone Snitched On Him 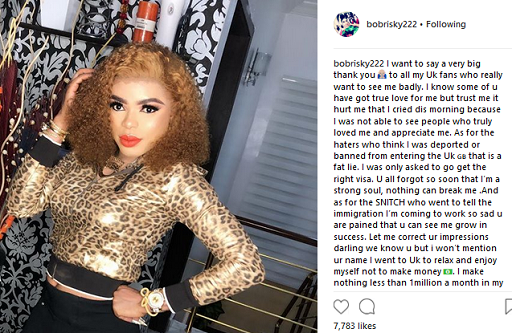 Bobrisky was supposed to be in UK yesterday for a Meet & Greet with fans ahead of his birthday celebration in London, however, he was denied entry at the Heathrow airport.

According to the cross-dresser, someone snitched on HIM. Someone alerted the authorities Bob was coming to work with a visiting Visa, and also showed them evidence. They were waiting for Bob when he arrived he was excused off the line and questioned. Bob couldn’t defend it and so he was denied entry into the country and was forced to return back to Nigeria. He arrived Lagos early hours of this morning and people have been mocking him on social media.

He has now been forced to address the report saying his haters are behind it, and he will be back to London soon with the right visa. What he said.

''I want to say a very big thank you 🙏 to all my Uk fans who really want to see me badly. I know some of u have got true love for me but trust me it hurt me that I cried dis morning because I was not able to see people who truly loved me and appreciate me. As for the haters who think I was deported or banned from entering the Uk 🇬🇧 that is a fat lie. I was only asked to go get the right visa. U all forgot so soon that I’m a strong soul, nothing can break me .And as for the SNITCH who went to tell the immigration I’m coming to work so sad u are pained that u can see me grow in success. Let me correct ur impressions darling we know u but i won’t mention ur name I went to Uk to relax and enjoy myself not to make money 💴. I make nothing less than 1million a month in my country, I became so famous in my county, Snapchat pay me in my country so tell me why I won’t love my country NIGERIA 🇳🇬. Out of dis money I make monthly I still help the needs who need my help. Uk immigration treated me awesome 👏 because they went through my past record of all the country I have visited for the past few years and there was no BAD record. So nothing still change my coming to Uk 🇬🇧. I came home voluntarily to get the right visa I’m coming Uk lovers ❤️''

Posted by Unknown at 6:27 pm
Email ThisBlogThis!Share to TwitterShare to FacebookShare to Pinterest
Labels: Gists