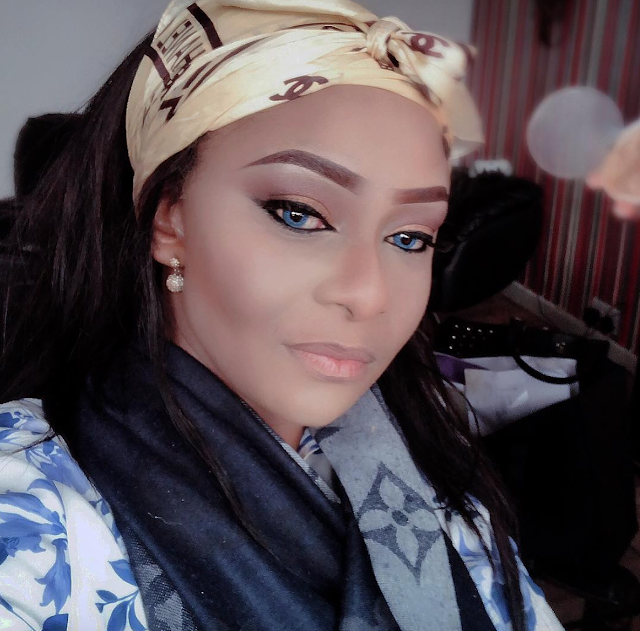 The veteran actress, Victoria Inyama, kicked off her acting career with a soap opera titled Ripples between 1998/1999; this was after she was discovered by Alex Usifo who saw, the talent in her and invited her over for an audition. Describing her days in the industry as beautiful and memorable, the beautiful mother of three told Saturday Beats some of the things she feels make the profession look embarrassing compared to how it was when she started her career.

“My days in the industry were lovely; there was so much love; there was so much hard work. People wanted to act for acting sake, they didn’t want to act because of money. We were competing with who could cry the most, memorize long lines the most, who was the saddest character and stuffs like that unlike now that it is all about unnecessary competition like cars and houses. Back then, it was just innocent and genuine competition. It wasn’t for the fame but integrity.

“The truth is, these days it is an embarrassment being called an actress. You want to be called something else because there is no respect for that name anymore. Sometimes, I can’t wait to qualify as a psychologist so that when you think of Victoria Inyama, it will be in another light. Those in the industry now are doing a lot of things that shouldn’t be done in 2018. It is not just one particular thing that they should stop doing; from the picture, storyline, artists, and costumes, some of them are just weird and out of place. Once I see certain names in the production, I don’t even bother,” she said.

Inyama, who spoke with Saturday Beats from her base in the UK, also talked about how she was able to survive cancer after she moved to the UK; sharing some of the lessons she learned from her ordeal and how she has been able to get back on her feet and stay healthy after surgery.

“I snapped back fast after surviving cancer because we have the medical amenities here and there is adequate aftercare and treatment. So it was just left to me to live the right lifestyle in terms of food intake and taking things easy. The whole process of me surviving cancer taught me humility and also to appreciate life more.

“It started while I was in Nigeria, I used to have serious pain on the left side of my head, I went to notable hospitals and they used to say I had a migraine, they gave me drugs for a migraine. None of the hospitals bothered to do a proper MRI scan or anything like that. But when I got married and I had to relocate,  it got worse and I had to be checked. They found out that I had some cancerous growth in my head; that was in 2005. The medics started the treatment almost immediately. I got married in 2003 and relocated in 2004; when they noticed it, I had just got pregnant with my first child. When I got pregnant, the pain subsided,” she said.

She further gave details of her ordeal.

“I had to undergo an emergency surgery in 2006 and waited for the place to heal and by February 2007, the growth was actually blocking somewhere around my left eye and I was almost going blind. The doctors said they had to remove the growth in my head. Apparently, what they brought out from my head,  they cultured it and they had to call me back and told me it was a cancerous cell. They recommended chemotherapy and radiotherapy,” she added.

The actress who is presently pursuing psycho-social studies in the UK recently had a spat with the Zone 2 Police PRO, Badmus Dolapo, over her advice to ladies on the negative sides of being a baby mama. Speaking on the reason why she shared her opinion on the PRO’s advice, Inyama emphasized that she had to speak like that to her because of her office as an image maker.

“Learning what society is all about, sometimes when it is a societal issue and you feel you have a bit of background knowledge on an issue, you try to break it down. A lot of the time, I read what this lady posts and I am always thinking that this is someone in authority; someone that has an office and the office is supposed to be having a major impact. I also read about this SARS group and the rubbish they do, the police have never been our friends and that is why for years, they have been crying that the police is your friend, the police are even trying to change their image and they put someone as their image maker, and the last thing an image maker should do is to pick on personal, petty things and when she is thrown an opportunity to do her job, she detaches herself from it. I have personally read when people write to her about how SARS harass people and I have read her replies, telling people not to tag her on anything about SARS, and I was thinking what is she there for.

“I took time to read everything the lady wrote on her page that day; I really felt bad because first, I was seeing a young innocent girl and a young boy who didn’t really know what they were doing and she took someone’s private pain and used it to put herself as a better person. If you want to come out and advise a certain people, you have to be careful not to generalize.

“Most of these young girls that have gone out to get pregnant and have a child did not plan to be a baby mama, they were just having unprotected sex and it happened. It is not in her office to do what she did. If she is mentoring young people as she claims she is, she should mentor them on behavior and social skills, keep them busy so that pregnancy is the last thing on their mind. That is her duty as a mentor, not to come out and slag everybody off,” she said.

She further revealed that nothing the PRO said to her made her feel bad.

“I didn’t go to her page because I know my limits. I dropped my comment about her post on the blog where I saw the story. She came at me and wrote something about me, thinking it would hurt me, I told her how to be good at her job and the only thing she could tell me is that I am old, I should go to other actresses for them to give me a role and that I have a bitter marriage but I just ignored her.    I am very sure she would have asked why my marriage failed and they would have told her it had nothing to do with anything I did. It was just that the guy was violent and we had a lot of domestic violence issues until the violence section of the police had to come and move me and my children; so it wasn’t as if there was something terrible I did,” she added.

Posted by Unknown at 11:24 am
Email ThisBlogThis!Share to TwitterShare to FacebookShare to Pinterest
Labels: Gists