We Wanted To Use The Money To Celebrate Xmas – Bank Robbers 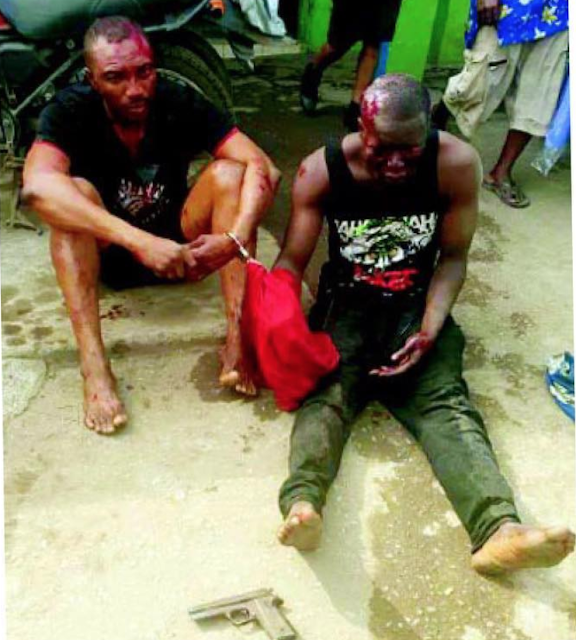 One of the two bank robbers arrested, on Friday, in Lagos, has said his plan was to use the money realized to celebrate Christmas.

According to vanguardngr, policemen attached to Ilasamaja division arrested the duo who specialized in attacking customers, who had gone to withdraw money from banks at Sadiku/ Ilasamaja, along with the Oshodi-Apapa expressway.

Boniface Ewerem, 46, and Joseph, 42, who usually operate on motorcycle, had positioned themselves along the service lane, awaiting their victims.

It was gathered that immediately a male customer who had gone to withdraw N350,000, stepped out of one of the banks at about 2pm, Friday, the suspects ordered him to bring the money, pointing a gun at him.

One of them fired a shot into the air as he snatched the money from the customer and zoomed off in their operational motorbike. Luck, however, ran against them as policemen from Ilasamaja chased and caught up with them.

In an interview with newsmen, one of them, Joseph, said: “This is my first time. I wanted to use the money I would have stolen, to celebrate Christmas. We never had any intention to kill our victims” 📷: Vanguardngr

Posted by Lawrencia at 3:45 pm
Email ThisBlogThis!Share to TwitterShare to FacebookShare to Pinterest
Labels: Crime